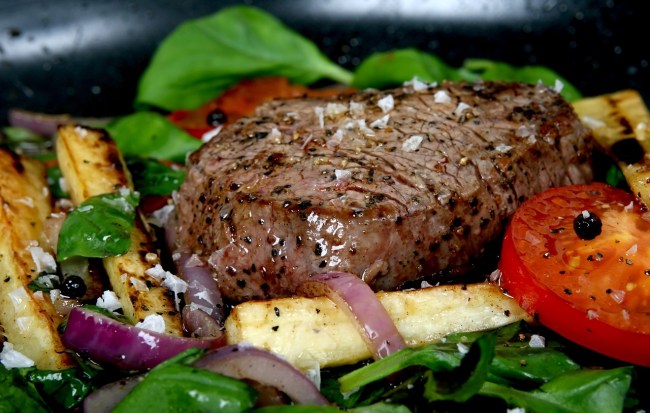 Last night, in Washington D.C., President Donald Trump went out to dinner at BLT Steakhouse in his flagship Washington D.C. hotel. Benny Johnson from LRJ was tipped off to the meal, so he booked a table and meticulously documented what it’s like when President Trump leaves the White House for dinner.

The whole read is a fascinating look at what it’s like to dine at a table next to the President. Go read it. One of the most interesting factoids, however, will make red-blooded carnivores cry: The President ordered his 30-day dry aged steak well done with a side of ketchup. That’s a cardinal sin to any serious steak-lover anywhere. via LJR:

“The President ordered a well-done steak. An aged New York strip. He ate it with catsup as he always does. The sides and appetizers on the table were shared. Three jumbo shrimp cocktails were delivered before the meal. At one point, the President looked at his watch and remarked ”They are filming ‘Saturday Night Live’ right now. Can’t wait to see what they are gonna do to me this week.“ It was hard to serve him because he is so funny and relaxed, it makes you laugh.”

If the idea of a well-done steak with ketchup makes you cry, GrubStreet elaborates on why it’s such a big culinary no-no:

At high-end restaurants, like the BLT Steak where Trump ate, much of the meat is also dry-aged, which is to say it’s left out for some degree of time to help meat tenderize before being cooked. If anything, dry-aged steaks require less cooking time, not more, since some of the breakdown has already occurred in aging.

Trump, of course, likely realizes that his steak is lacking in moisture, and so — at least according to the account of a server at BLT — “always” orders it with ketchup. The point of a sauce is to amplify the best qualities of the food to which it is being applied. Bordelaise sauce enriches a great steak’s deep beefiness. Bearnaise, on the other hand, amplifies a steak’s wonderful fattiness. Ketchup, which is great on things like fries, is too assertive for steak — it masks the flavor. There’s a reason McDonald’s uses it on cheap, low-quality burgers. But with steak, the value proposition makes no sense: Why spend $54 on a piece of meat, only to make it taste like something that costs far less?

“There is no sense in smothering a perfectly good piece of meat with tomato-flavored high-fructose corn syrup,” Nakamura says. “If you want to eat your meat with ketchup that badly, make a goddamn meatloaf.”

Something tells me Donald Trump rarely goes for the meatloaf.