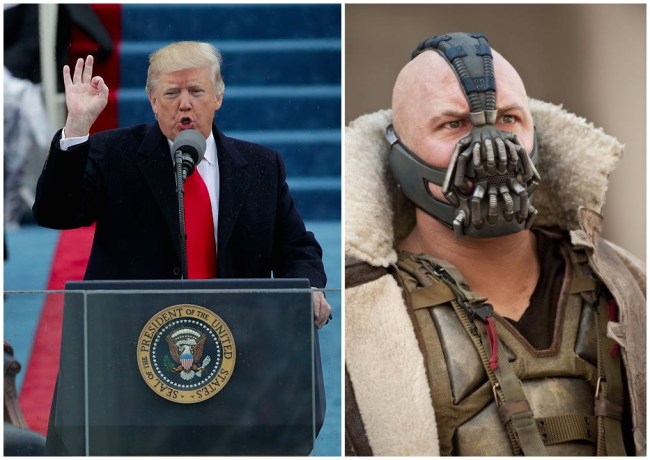 Donald Trump is now the 45 President of the United States of America. In his inaugural address, he borrowed a quote from Bane in Dark Knight Rises. Let’s not forget, Bane is a a fictional terrorist super villain… He also gets his ass-handed to him by Batman, the real hero of Gotham.

Uhhh Trump just quoted Bane from Batman. "We're giving the power back to you. The people."

As you might recall, this is from Bane’s infamous “We give Gotham back to you!” The *you* being anarchist villains, thieves, and crooks. Here’s a video edit:

And here’s the full thing:

WAIT it all makes sense!! Donald Trump is Tom Hardy I mean Bane from Batman. pic.twitter.com/NnZUzDoQy6

Bane (The Dark Knight Rises): "return control of this city to the people"
Trump (USA): "transfer power from Washington DC to the people"

Trump just quoted Bane from Dark Knight Rises in his inauguration speech. If that doesn't have ppl worried I don't know what will lol

So Trump just quoted Bane….. idk if that means anything to you but it should

Pretty sure Trump just quoted Bane there with "giving power back to you. The people…"