Nearly 500 Earthquakes Rumbled Yellowstone This Week – Should We Fear The Supervolcano? 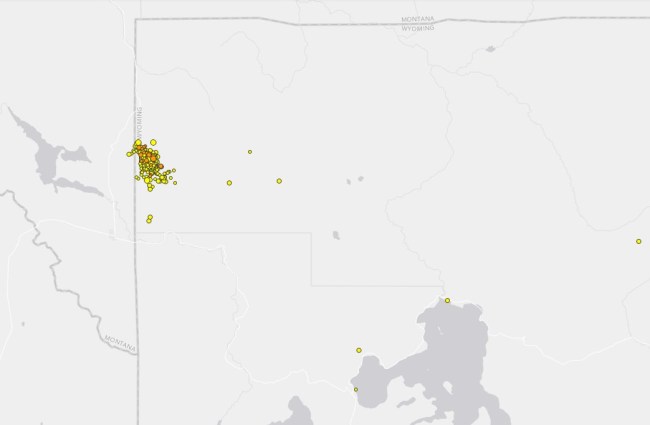 “This is the highest number of earthquakes at Yellowstone within a single week in the past five years, but is fewer than weekly counts during similar earthquakes swarms in 2002, 2004, 2008 and 2010,” scientists said. Seismic activity can be an indicator that a volcano has awakened and is preparing to erupt.

Doomsdayers are concerned that when the Yellowstone Supervolcano AKA the Yellowstone Caldera does go off that it has the potential of being an E.L.E. (extinction level event). Theoretical physicist Michio Kaku said an eruption at Yellowstone is long overdue and a supervolcanic category 8 eruption could “tear the guts out of the USA” and eviscerate up to 20 states.

A nation-ending supervolcanic category 8 eruption, which happen every million years or so, would plunge the entire area into complete darkness. Nearly all living things within 100 miles of Yellowstone would be immediately killed when the pocket of lava located under the park would be spewed into the atmosphere. Estimates predict that 90 percent of all people living within 600 miles of Yellowstone would be killed in a category 8 eruption and the ash would contaminate the drinking water.

Scientists currently believe that there’s a 10% chance that a supervolcanic category 7 eruption, which would be the size of the eruption at Mount St. Helens in 1980, could take place this century. The Yellowstone Caldera or the crater is gigantic measuring 34 by 45 miles.

Experts at the USGS say the risk of an eruption at Yellowstone supervolcano is low. Despite the nearly 500 earthquakes, they still give Yellowstone a normal status and is at a non-eruptive state. The probability of a large eruption at Yellowstone in the next year is calculated to be 1 in 730,000. United States Geological Survey experts say that it would take a series of powerful earthquakes and ground uplift to ignite a mega-eruption.

A lot has been trumpeted about the devastating effects of a supervolcano eruption but there seems to be no need to worry on this occasion. The last time the Yellowstone Supervolcano had a mega-eruption was 640,000 years ago and the supervolcano hasn’t erupted in any monumental way for 70,000 years. So you could read that as it’s not happening for hundreds of thousands of years or you could view that data as we’re due. Have a fun day!