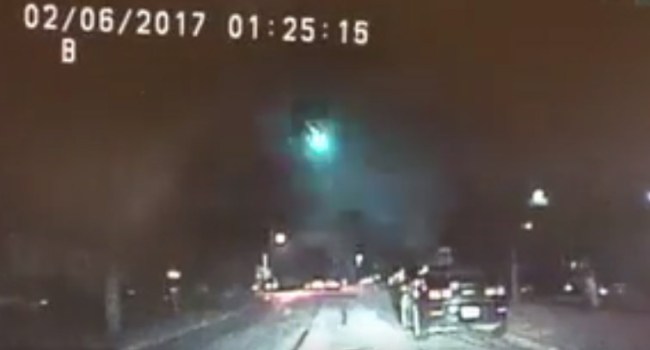 Folks in northeastern Illinois and southeastern Wisconsin wouldn’t have be wrong to think that the apocalypse was coming on Monday night.

That’s because a huge fireball meteor landed in Lake Michigan Monday night around 1:30 AM Central time, but not before it created a sonic boom and lit up the night sky.

Mike Hankey with the AMS [American Meteor Society] said the meteor created a sonic boom that shook houses in the region. The large space rock, estimated to be about the size of a car, flew over Lake Michigan, and pieces of the meteor “most definitely” impacted in the lake.

“The cloud of debris was picked up on NOAA’s NEXRAD Doppler Weather Radar, so this is a definitive source that rocks made it all the way down,” says Hankey. “Reports of sonic booms also suggest it survived passage through the upper atmosphere.”

About the size of a damn car!

Check this ish out…

So why is it called a “fireball” meteor?

A meteor that lights up in the sky more than average is called a fireball, and the AMS classifies a fireball as a meteor brighter than magnitude -4. Last night’s meteor was much brighter than that however, as many stars in the night sky are brighter than magnitude -4, which is about equivalent to Venus at its brightest. The exact magnitude of the meteor last night is not yet available, but it “rivaled the brightness of the sun, and we can tell that by the shadows it cast in some of the videos,” says Hankey.

It rivaled the brightness of the sun. No wonder people might have thought they were under attack. Couple that with a sonic boom and I’d have been under my bed.

Hankey also said that Monday night’s meteor weighed at least 600 pounds and was “on the larger end of anything we’ve seen.”