Florida Man Tries To Get Frisky With A Rattlesnake, Gets Bitten Like A Fool 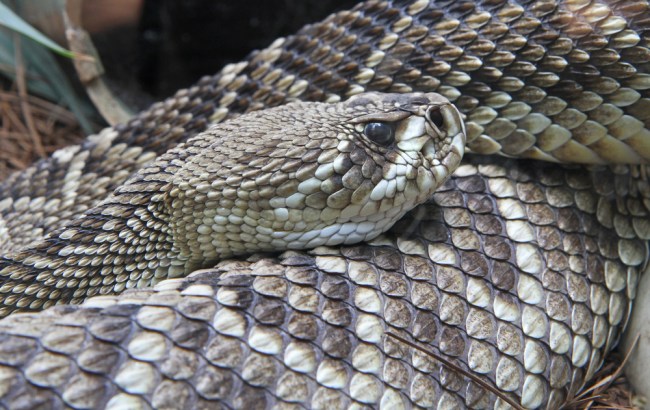 Play stupid games, win stupid prizes. That is the mantra of each and every so-called Florida Man who finds himself in a headline like this one.

This man from Putnam County, Florida found himself in the hospital after trying to kiss a wild rattlesnake that had been caught and kept in captivity less than 24 hours prior to the incident. I’m sure there’s some old adage about not sticking your lips on wild animals, but this dude must’ve missed the memo on that one.

Instead of exercising caution this man tried to kiss the rattlesnake…Yes, he tried to fucking kiss a poisonous rattlesnake….

Charles Goff said he found the rattlesnake on Monday night. He said he knows how to handle snakes and put it in a tank.
He said his neighbors should not have been playing with the snake when Reinold was bitten.
“The next morning before I got up, they were playing with the snake,” Goff said. “One boy said, ‘I’m going to kiss it in the mouth,’ and the snake bit him in the face.”
Goff said Reinold and another man were being irresponsible by playing with the snake.
“Ron was just acting silly, you know?” he said. “I guess he said he could kiss the devil and get away with it, but evidently he didn’t.”
Goff said he believes his neighbors let the snake go after it bit Reinold.
“So the snake is still out here running around somewhere,” he said.
An expert told Action News Jax that the bite was likely very painful.

The phenomenon of ‘Florida Man’ is something that’s captivated the nation for years. I live here in Southwest Florida where I was born in raised. There’s a constant river of ‘WTFlorida‘ news flowing out of this state thanks to a unique confluence of factors.

You have Midwesterners and Northerners who ‘crack’ in the middle of Winter, pack up the car and ‘head to Florida’ for a better life. I put that in quotes because I’ve met more than a handful of bartenders who told me that exact life story. You also have an overabundance of elderly people slipping into pill-addled dementia. There’s also the issue of ‘affluenza’ on the coasts, situations where you’ve got extremely wealthy people raising dipshit kids who don’t know right from wrong or up from down. Couple this with the fact that the state of Florida is extremely lax on news organizations sharing details of arrests and it creates the perfect storm of news…and thus the phenomenon of Florida man exists.