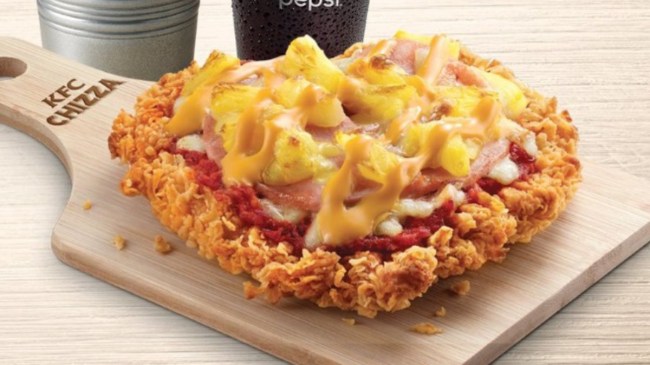 Do you ever hear of a snack combination that makes you pant so heavily that you actually need a couple seconds to catch your breath? Happens to me a couple times a day as BroBible resident dude-who-loves-to-eat-junk-food. Fried chicken and pizza are two of my favorite food groups, so KFC gets my daps for infinity for creating a new product they’re called “The Chizza”. It’s an unholy Frankenstein food mash-up that gives me joyful convulsions and lustful food sweats:  Pizza on a piece of fried chicken.

Here’s the catch: It’s only chillin’ in Asia for the time being, as AV Club notes:

The Chizza has been making its way through Asian fast food markets for a few years now, initially debuting in the Philippines back in 2015, before spreading to India later that year. Now it’s in Singapore, oozing like the “KFC Cheese Sauce” that rests atop its gooey throne.

If Donald Trump truly wants to Make America Great Again, he’ll sign an executive order to bring this to America by the end of the week. What’s the point of loving fast food and having all that power if you can’t get KFC to bring something so wonder to our fair nation?

The legendary #KFCChizza has FINALLY arrived in Singapore!!! Who's excited?! pic.twitter.com/E0QA4A60mC