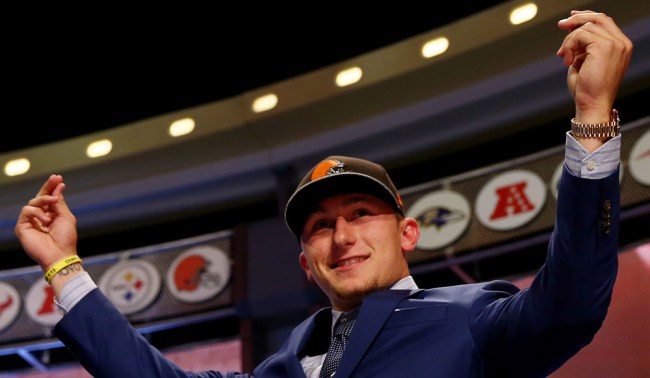 Mark it down, Thursday, March 22, 2018 is the day the Johnny Football became officially BACK. That’s right, Johnny Manziel’s #COMEBACKSZN was in full effect on the campus of the University of San Diego in front of NFL scouts as JFF slung the ball around, showing off that same rocket for an arm we saw him put on display a few weeks back at UCLA.

Manziel was there as a part of the University of San Diego’s pro day to show off his skills before heading out to play in The Spring League at the end of the month.

Johnny Manziel warming up before he starts throwing with USD Pro-Day. pic.twitter.com/uM8uZE8wYr

A lot of people observing Johnny Manziel warm up before he starts throwing. pic.twitter.com/KBgZLa3mJW

Johnny Manziel is starting to do end zone throws. pic.twitter.com/6y90Jbcd0U

Johnny Manziel continues to throw into the endzone. Misses one pass. pic.twitter.com/ZRpd7CTyjp

Johnny Manziel on how he felt throwing today. pic.twitter.com/MtmHGsv2H1

Johnny Manziel on how he has changed from the last time he threw an NFL pass to now. pic.twitter.com/whIZyLTgvZ

Manziel even doled out some sage advice to all the young quarterbacks who will be following in his footsteps at the NFL Draft.

“I would say enjoy the process, because, you know, right now it’s still, you have a little bit of free time. This is the part where — they’re all done with their pro days, so… You can’t stress about the draft. I stressed about it too much, and I think it made my time a little bit uneasy.

“So, just for them, I wish them all the best. I thought Sam’s pro day was great yesterday, just from what I’ve seen so far. I’m pulling for those guys. Enjoy the time now because whenever you get to the league and it starts, it really starts and things are a little bit different.”

With the NFL draft a month away Johnny Manziel talks about what he would tell you g QB’s like Sam Darnold Josh Allen and Josh Rosen. pic.twitter.com/srYX196IVC