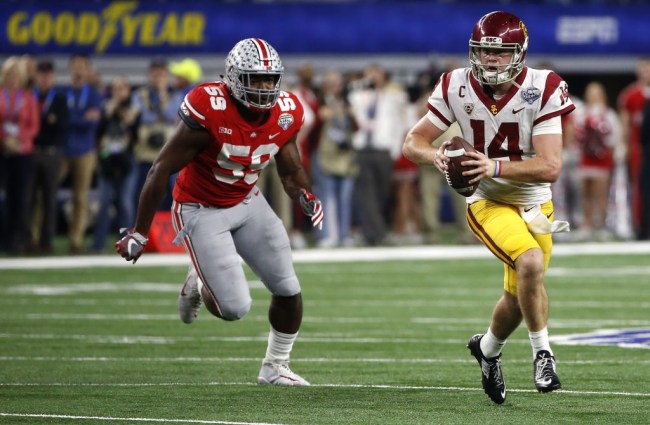 Sam Darnold worked out and threw around some footballs today in his Pro Day and apparently he impressed everyone who watched him. According NFL writer Benjamin Allbright the feeling around the league among NFL execs is the the Browns are going to pick Darnold #1 overall in the upcoming draft.

It was pouring rain, but that didn't stop Sam Darnold from throwing dimes at his Pro Day. 🎯 pic.twitter.com/Wj7YARyOG3

Seems like Matt Millen heard the same thing about Darnold.

"Darnold is the favorite to go #1. I'll be shocked if he isn't the pick" – NFL director of college scouting to me just now

Darnold has met with Browns owner Jimmy Haslem and said he’s fine with playing with the Browns because he’s excited about the moves they’ve made in the offseason.

He enjoyed meeting with Haslam and the whole Browns staff, who took him to dinner on Tuesday night. Haslam also spent time chatting with Darnold’s parents in the USC stands during the workout. Darnold also had dinner with the Giants, who pick No. 2, on Monday night.

“I met with him (Haslam) yesterday, he’s a great guy,” said Darnold. “That whole staff is awesome. Those people are at the top of the world right now. I’m trying to impress them but at the same time be myself.”

He also said on ESPN that he really likes where the Browns are headed “and there’s a part of me that really wants to go No. 1” but also wants to go where he’s most wanted.