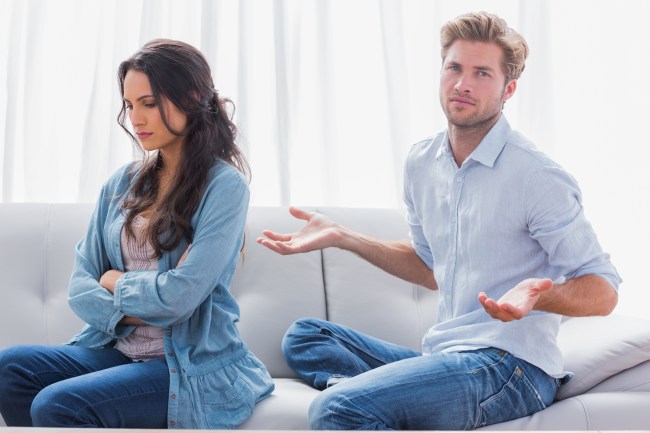 Relationships are all about sacrifice and stability. Picking your battles and letting sleeping dogs lie is as essential in a relationship as not banging your partner’s sister. If you complain about everything, you’re not really complaining about anything. That’s why sometimes you gotta live with the birds nest of hair in the shower drain and suffer through an episode of Real Housewives if you don’t want to be bopping it on the couch for a week.

It may sound beta to let your partner’s irritable traits slide, but consider how much nauseating shit you do on a daily basis and how much is actually brought to your attention. Yeah, perspective.

The married folks of Reddit came out in droves to answer the question: What is the harmless elephant in the room that won’t affect your relationship but you never speak of?

Here are the best responses:

My wife is the absolute worst story teller ever. She is so smart and funny, but my goodness, her stories go on forever. She takes a story that should take 2 minutes to tell and turns it into a 25 minute story with EVERY SINGLE DETAIL that actually happened.

Dude my ex in high school is still telling the story about how she met Mario Lopez at the mall.

The two relationships I was in directly before I met my wife ended when my partner died. Nothing suspicious, they both died of cancer. Different cancers. But my wife knows I miss one of them still and we never talk about it.

Jesus dude. No offense, but if I were her, I’d pack up my shit and run.

My wife doesnt screw the top back on the bottle of….. anything. Everything with a lid is a potential bomb.

Neither of us puts up laundry. It’s supposed to be one washes the other puts it away but neither of us do it. All our clothes just sit in baskets 99% of the time. It irks us both but we’re both guilty so we keep our mouths shut.

I’m 30 years old and I still don’t know how to properly fold shirts so the front is showing.

Well, it was a long time ago so it doesn’t matter now, but the time I farted in front of her whole family while we were all crowded around a small table looking at something. It was a bad one. One of those ones that’s hot coming out. Nobody flinched, left the table, or ever said a word about it.

The hot ones are toxic.

I’ve seen her Ex showering in the gym and his dick is about twice as long and thick as mine..

She once bragged about being good at chess and I beat her in 5 moves using a tactic i found on Youtube. We don’t speak of chess anymore.

My wife leaving food out on the counter without every putting it away disgusts me and I end up cleaning up after her every day.

I leave my socks everywhere which she finds repulsive, but she cleans them up and never says anything.

Neither of us are changing our ways so we just accept it.

Food left out overnight is unacceptable.

80% of our marriage is one of us says

And the other saying “What?”

I don’t think it will change

Those fucking keys have a life of their own.

My wife uses all the dishes when she cooks. I don’t even know how that’s possible. I’m grateful for the meal but salty that whoever doesn’t cook does the dishes.

Samesies. Almost broke up with my girlfriend over this shit.

To read the rest of the thread, head over to Reddit dot com.