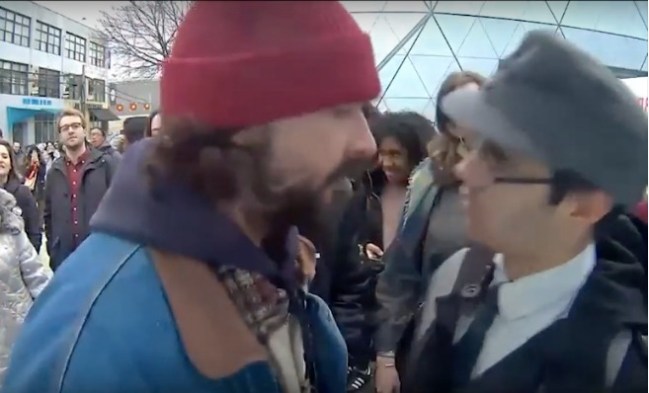 Last month, Shia LaBeouf started the “He will not divide us” performance art on Inauguration Day in New York City. The actor had planned to protest democratically elected President Donald J. Trump with a livestream broadcast for the next four years of Trump’s term. Shia had a good run, but missed his goal by three years, 11 months and 10 days because the project was shut down. On Friday, the contentious concept was terminated because it had turned into “a flashpoint for violence.”

The Museum of the Moving Image in Astoria, Queens issued a statement:

We take our commitment to the safety of our 200,000 annual visitors and 50,000 school children attending programs at the Museum seriously, along with the safety and security of our staff and community.

We are proud to have launched this engaging and thought-provoking digital art installation which was experienced by millions of online viewers worldwide. Until public safety concerns overrode the intent of the installation, HEWILLNOTDIVIDE.US generated an important conversation allowing interaction among people from many backgrounds and with different viewpoints. However, ending our engagement with the installation is the most prudent path forward to restore public safety to the Museum, its visitors, staff, and the community.”

The project, which was a camera mounted outside the Museum of the Moving Image, appeared to fuel several physical altercations including LaBeouf getting arrested for assault and harassment on January 26. Because of the escalated violence, police began patrolling the site around the clock.

The actor condemned the museum’s decision to shut down the project by saying, “The museum has abandoned us.”