Scientific Evidence Suggests Smelling Farts Could Help Save Your Life 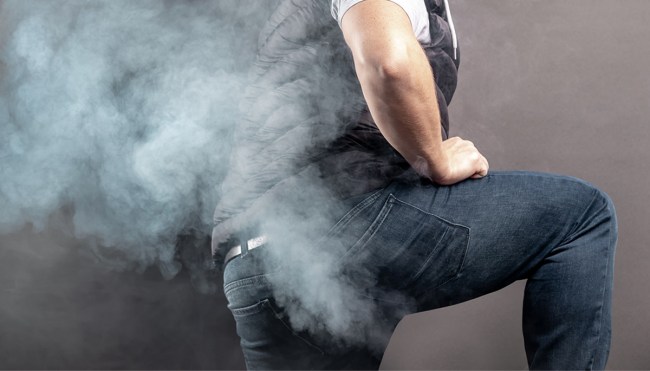 Accusing someone of enjoying the smell of their own farts is a fairly insult to describe people who think far too highly of themselves, but you’d be hard-pressed to find anyone who’d admit to genuinely liking the odor that tends to accompany a typical round of flatulence.

However, if your first instinct is to cover your nose when you’re in the vicinity of a cloud of butt gas, you might want to reconsider based on some surprising data that suggests taking a whiff could actually be good for you.

According to Healthline, researchers at Exeter University got paid real, actual money to conduct one of the more interesting experiences you’ll ever encounter after deciding to they’d help fill the scientific void I can only assume existed before they conducted a study concerning the impact that smelling farts can have on the human body.

It turns out they were onto something, as the data they were able to collect suggests smelling farts is good for you. Like, really good. Like, good to a point where the team ended up developing a compound called AP39 capable of duplicating the effect of treating your nostrils to a lingering ass blast.

Now, I’m going to assume you only have one thing on your mind after reading all: “Why?” That’s more than understandable—and hopefully you’ll have a better understanding once you check out the explanation.

Why Smelling Farts Can Be Good For Your Health

In an interesting twist, the primary reason farts can have health benefits is also the thing that makes them smell like death: hydrogen sulfide.

That chemical compound can be deadly in large amounts, but treating yourself to small doses of the irritant can be good for the cells in your body. By doing so, you’re essentially keeping them on their toes by inducing the workout they get thanks to the defensive response that’s triggered when hydrogen sulfide is detected.

2. It helps your body produce energy

Anyone who took a middle school science class is aware mitochondria serve as the powerhouse of a cell; those tiny structures play the biggest role in helping to produce energy.

Mitochondria lose their mojo over time, and when that happens, cells die. However, there’s something about that sweet, sweet smell of broken wind that invigorates mitochondria and kickstarts them into producing more energy (your cells even produce their own hydrogen sulfide when the mitochondria start acting up)

Inflammation is frequently indicative of some sort of drop in bodily health that can result from a litany of inner and outer physical trauma.

However, cells boosted with fresh hydrogen sulfide can do a better job staving off inflation and promoting recovery.

A healthy cell is an illness-fighting cell, so turning to farts to keep them in tip-top shape can help prevent and reduce the impact of infections, disease, and other conditions.

5. It treats a variety of specific age-related conditions

Stuff like strokes, heart failure, diabetes, arthritis, and dementia can stem from a variety of factors, but there’s an unavoidable issue that makes them more difficult to avoid: getting old.

All of those conditions are generally treated with (and can even be prevented by) treatments that prevent cells from dying. Those treatments are engineered to have a slightly more drastic impact than what you’ll get by standing downwind of someone who broke wind, but you can still reap the benefits to a lesser degree.