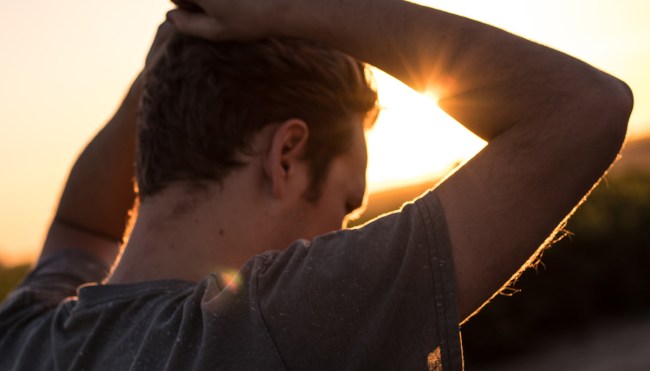 If you’re reading this, there’s a good chance you’re dealing with some unrequited love or the fallout of a relationship that didn’t work out as hoped. You’ve also likely encountered plenty of people who’ve told you something like “You’ll get over it soon” or “Don’t let it get you down,” but those so-called pieces of advice probably haven’t done much to ease the pain.

Unfortunately, getting over a girl that you’ve been obsessed with for a while can be one of the most difficult experiences in a guy’s life—whether we like to admit it or not.

Weaning off somebody you’ve been interested in for weeks or months—or even years—involves not only an acute sense of self-awareness, but also a determination to break away from patterns that have developed in an attempt to woo the girl you’ve been pursuing.

And that list of patterns and behaviors can include the most random type of stuff: getting your haircut once a week, buying clothes you would have never worn before, tracing her daily schedule and trying to find ways to bump into her, pretending to be interested in something you otherwise couldn’t care less about. In other words, complete desperation.

For now, though, don’t think about how you might have fallen into one of these categories in the past—or if you are currently playing the part. Rather, listen up because here are five solid ways to get over the girl you’ve been obsessed with:

Yep, take the high road (a.k.a. the selfish road).

Tell your buddies you’re not looking for somebody right now and that you’re taking some time to figure out life. (Why? Because forgetting takes time.) It will probably sound like you’re having a mid-life crisis, but let them worry about it as you plunge headfirst in a new direction.

Assess yourself, but do more than just that: set goals that you can achieve in the short term and then work towards building them in the long term. Whether it’s developing a new hobby or adding to the intensity of your gym routine, whatever it takes to get your mind on you and off of her.

It sounds like a borderline self-help suggestion, I know, but it really is the only way to recalculate the way your brain is thinking at this particular obsessive-fueled moment.

This might result in some detachment from close friends and colleagues, and that’s why you need to keep them in the loop.

2. Communicate with your allies

Guys hate to express their feelings — everybody knows it, and in this particular situation, you’re more inclined to waver towards the stereotype than break away from it.

The good news is that if your obsession is bad enough, then you will give in and eventually confide in someone about everything that you’ve been experiencing. It’s a large weight to shoulder all alone. It feels a lot better to talk about it out loud.

You could tell your closest friend that’s a girl or you could share it with a close bro, either way just saying the words “I have feelings for…” will go a long way in helping you start the process of getting over that person.

(Large Disclaimer: All of this “advice” stems from the fact she doesn’t reciprocate your love for her. If you’ve asked and she does, then stop reading this and go swipe her off her feet — it’s not that complex, bro. If the love is not reciprocated, then that’s why you are here and need to read the final three points because they’ll help you get over her.)

Let’s continue because I feel there’s an obvious one that most guys don’t follow in the process of changing their thoughts and behaviors.

Like all of the items on this list, this is a lot easier said than done — especially if she is in close proximity to you on a daily basis. This means she could be a co-worker, a friend of a friend, someone who lives in your building, somebody you grew up with who has now moved to the city you’re living in, etc.

The list of possibilities goes on and on, but the real key to this is limiting your interactions with her and building up a force field that she can’t penetrate (more on this in a second).

Remember: the key to getting over her is distance. If you can’t physically remove yourself from where she’s living (like if she goes to college with you or works with you), then you’ve got to find a way to increase the distance between the two of you in other ways. Any other model will fail, I can promise you that — distance, distance, distance.

Go on a trip if you have to; anything to limit your interactions with said girl as you enter into this healing process. Plus, an adventure to a place you’ve never been before might provide the spark you’ve been looking for all this time to jumpstart your life and get you moving forward.

First and foremost, don’t text her anything. In fact, don’t engage her in any form of social media. And taking it one step further even, don’t engage in social media — period. Why? Because whatever you’re posting is subconsciously trying to earn her attention and approval. (STOP TRYING TO IMPRESS HER!)

You want to break from this pattern, remember? Anything that contradicts this line of thinking will have you landing back on square one in no time. That’s not what I want for you. This is a healing process, and we’re in it together.

“OK, so what if she texts me something cute to try to keep me around?”

This is part of the force field building, and perhaps the most difficult part of it. Don’t play games with her. Only engage on urgent and pressing matters, and even then keep communication brief and to the point. For example, if your mutual friend is having trouble and she wants your opinion, then answer her. But if she’s just sending you a Snapchat of herself in pajamas, then don’t bother responding.

Deleting her number entirely shouldn’t be necessary. You should be able to do this organically without acting like a teenage girl (but in all seriousness, if that’s what you feel it takes then I’m not going to deny you that out).

This is actually a two-for-one because the exercise of throwing stuff away—it doesn’t necessarily have to be related to her—actually helps the mind forget and is a healthy exercise in general.

Of course, you’re trying to ignore your feelings for her (or box them up and remove them entirely), so this means you have to go on an all-out assault of the material items in your room or apartment that remind you of her.

Warning: you could be getting rid of a lot of stuff here, but commit to this exercise and you won’t regret it because you will find closure somewhere in the bottom of those trash bins.

How? Because while you’re doing this, you will automatically think back to specific moments when you were with her and think about how you felt. Were you happy and at peace being yourself or were you rattled by trying to impress her by being someone you’re not? Most likely it’s the latter.

If it’s the former, I don’t know what else to say other than you’ve got a longer ladder to climb than most guys but you can do it by following these five steps. It’s supposed to be a hard process, but it will make you a better man in the long run.

I can guarantee it.

Watch the following list of films (they’ve always helped me out a lot in the past when I’ve had to deal with these types of situations):

Swingers: The Holy Grail of ‘guy getting over girl’ movies; there simply isn’t anything better than this scene between Mike and Rob. An all-time classic.

Forgetting Sarah Marshall: Remember what I said about going on a trip? It wasn’t an original thought. I must have watched this movie 500 times in college before I even realized why I liked it so much.

Peter Bretter is how I’d like to imagine any man when he’s apparently down and out: resilient, triumphant and willing to try anything to get over his former love. It should be noted that banging Mila Kunis always helps with that.

Chasing Amy: My favorite Kevin Smith movie besides the Clerks series. This is an underrated gem that contains one of my all time favorite scenes about getting over women and dealing with regret. Who would have thought Silent Bob could be so eloquent.

Forrest Gump: Are you kidding me? Forrest is the master of continuing on with his life and doing a damn brilliant job at it, despite the fact his soul mate doesn’t want to be with him. Of course in the end she realizes what a great guy he is and comes back to him. Sometimes things work out; sometimes they don’t. Life is odd.

Almost Famous: Probably the biggest stretch on this list, and maybe its just me, but this movie is too uplifting not to help cure all your life problems. I mean how can you argue that this scene doesn’t pick you up when you’re feeling down?

And there you have it. You just passed How To Get Over A Girl 101.