Is Donald Trump Or The White House Photoshopping His Small Hands To Make Them Look Bigger? 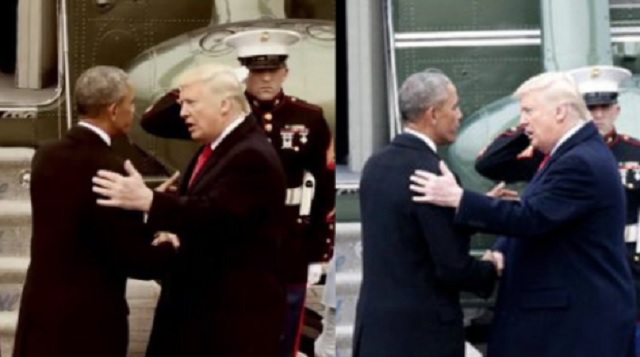 Is the White House photoshopping Donald Trump’s hands to make them look bigger?

Right now on Twitter people are debating whether Trump or the White House photoshopped this image of Trump bidding farewell to Barack Obama in front of a helicopter on Inauguration day.

Here decide for yourself.

Trump 100% photoshopped his hand bigger for this picture hanging in the white house, which is the most embarassing thing I've ever seen pic.twitter.com/MGTbFfdLqp

@DanaSchwartzzz Here, this is the absolute most precise I could get it. The color & contrast changes, but nothing moves. pic.twitter.com/zHFItu8Knx

Apparently some people aren’t so convinced.

No, these are pics taken at slightly different angles. The one on the right has Trump’s fingers more foreshortened. https://t.co/klAUfNSa9Q

And here you go: A GIF that I just made. Not aligned perfectly (my fault), but the hand is the same. pic.twitter.com/N7Zii1qRMY

Usually I would scoff at this speculation, but this is the same President who reportedly called the Parks Service director and ordered him to produce photos of large inauguration crowds that didn’t exist.

.@POTUS personally called the Parks Service director and ordered him to produce photos of the inauguration that showed bigger crowds.