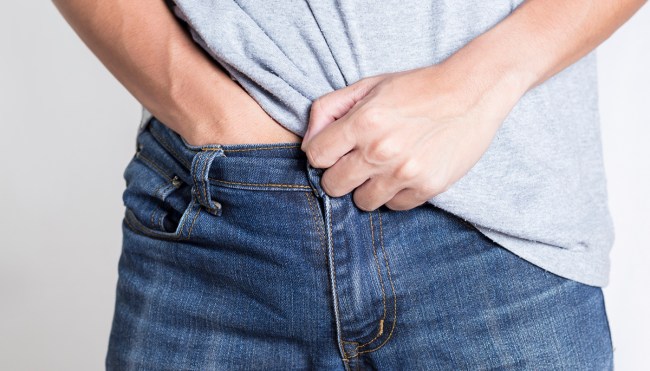 If you’re reading this and you are a guy, you know that you stick your hands down your pants way more often than is deemed socially acceptable. I always just assumed it was a cultural thing as much as a biological thing, but really never gave it much thought.

That’s why we have people smarter than us in the world: to investigate phenomena such as this that we can’t explain ourselves.

As to whether someone studying why guys always stick their hands down their pants is a proper use of time and money, that’s a debate for another day.

What is important here is that people DID take the time and the money to figure out why we’re always doing this.

Why Do Guys Stick Their Hands Down Their Pants? There Are A Few Possible Reasons

According to Vanessa Van Edwards, author of Human Lie Detection and Body Language 101: Your Guide to Reading People’s Nonverbal Behavior, here is one reason: it’s a safety measure.

Whether this goes back to caveman days and the need to protect the crown jewels or whether we’ve been victims of too many unexpected nutshots (and nutshot videos) over the years isn’t 100% clear though.

“You could think of the hand there like insurance against a friend who might give them a nut jab or a kid who accidentally hits a ball at them,” says Van Edwards.

Makes sense. But wait, we’re not done, there are still two more reasons…

A study in the journal Frontiers in Psychology says that touching yourself in a non-erotic way releases oxytocin, a hormone that calms the body and mind. So when we’re chilling on the couch grabbing our junk, we are literally “chilling” on the couch.

Speaking of “chilling,” here comes the third and maybe most obvious reason why guys put their hands down their pants.

That reason is: to keep the goods warm, of course. It’s the same reason your ballsack hangs low when you get too hot and tries to crawl up into your abdomen when it’s freezing outside (aka “shrinkage”).

Gotta keep them sperms at the proper temperature, you know?

So there you go. The next time someone gives you the side-eye for sticking your hand down your pants tell them you can’t help it. It’s just the way we were made. Science!