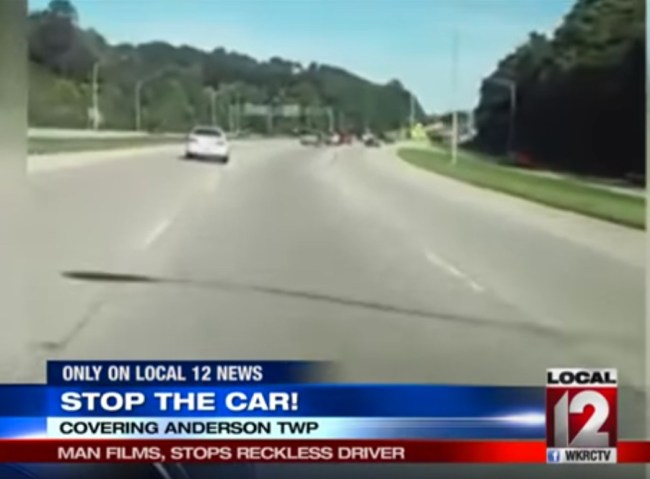 Sam Haynes was driving along Interstate I-275 when he saw Sandra Harris, 43, driving like a fucking idiot i.e. all over the road. While he eventually called the police after realizing the likelihood that this woman was going to kill someone that day was pretty high, he first did what any other 26-year-old millennial would do:

I mean, wouldn’t you? Did you even watch the video up there? It’s nuts. Like trying to figure out how this woman even made it onto an interstate without wrecking her car is baffling. According to Haynes, within the first 24 hours of his cellphone video of the incident being uploaded to Facebook it was viewed by more than 430,000 people and shared more than 10,000 times.

Eventually Sandra slowed down and Haynes was able to get her to pull over and come to a complete stop. According to Cincinnati.com,

Haynes and the woman sat in the median until two Sheriff’s deputies arrived. A few seconds after he stopped recording, Haynes said the woman passed out.

The woman, Sandra Harris, 43, of Mt. Orab, was taken to an area hospital where she was later cited, according to Hamilton County Sheriff’s Office officials.

Officials said on Sunday that Harris admitted to using meth and heroin before driving. To read more, click here.

Harris was charged with driving under the influence and received a marked lanes violation, officials said.

Sandra Harris is expected to have a court appearance in three to five weekdays.