We Linked Up With Animal Planet’s Forrest Galante And Toured His Insane, Animal-Filled Home 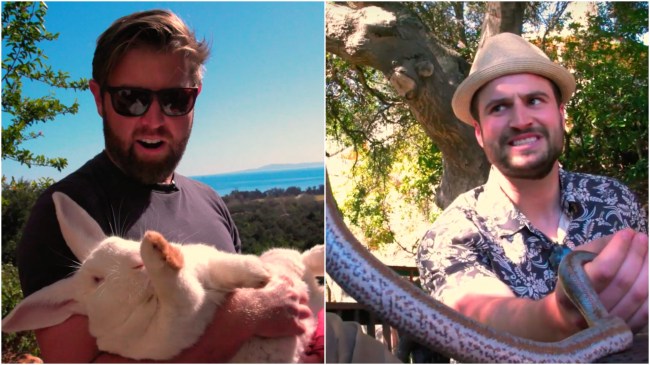 “Bobby Wild Life” took a trip to Santa Barbara to meet up with Animal Planet’s very own Forrest Galante at his house to discuss something I know very little about, animals.

Galante opened his doors to us for a personal tour of his own little animal sanctuary/home. For a guy who idolizes the late, great Steve Irwin it didn’t come as a surprise to see the blatant passion Galante has for his career with animals. His hit show “Extinct or Alive” on Animal Planet takes him on a journey all over the world to find animals that he believes are falsely labeled as extinct.

He makes it very clear that his passion for animals is far and away stronger than the desire to have his own show or be in the limelight of any sort. His hospitality skills proved to hold up as well as we were greeted by guacamole, hummus, and chips. I happen to be a big guac guy myself, I just prefer to eat it without a snake slithering next to me.

My extreme fear of animals throughout the entire tour makes you wonder ‘why would he sign up to do this?’ And for those of you who watched the video, I can assure you, I was wondering the same thing. It’s an action-packed 12 minutes that you are not going to want to miss. Be sure to subscribe to The Brilliantly Dumb Show on YouTube for all the action plus next week’s episode with The Wolf of Wall Street, Jordan Belfort.