Baron Davis Recalls A 38-Year-Old Michael Jordan Dropping 51 On His Hornets After A Career-Low 6 Points The Previous Game : ‘It Was Just Magic’ 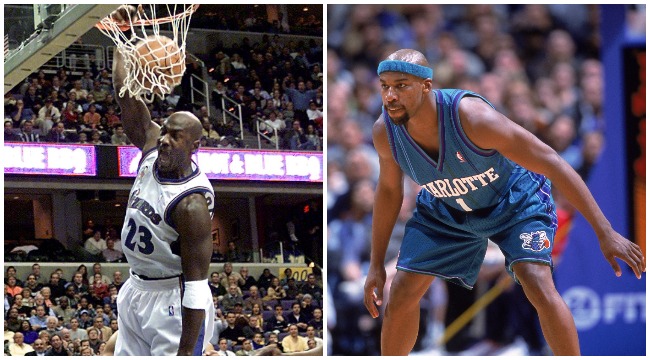 On December 27, 2001, a 38-year-old Michael Jordan channeled his inner Jared Dudley and put up the limpest stat line of his illustrious career in a 27-point blowout loss to the Indiana Pacers:

A dejected Jordan sauntered to the bench, strapped ice packs to both knees, and wrestled with the reality of breaking an 866 game double-digit scoring streak that spanned back 15 years.

Two days later, Jordan’s Wizards squared off against a playoff-bound Charlotte Hornets team, who were totally oblivious to the monster they’d encounter.

”I’m pretty sure you guys were saying how old I was,” Jordan said. ”And I wanted certainly to make a statement offensively.”

As we gleaned The Last Dance, this trash-talk Jordan spoke of at the time was likely just a motivational figment of his imagination.

Baron Davis recently appeared on our Endless Hustle Podcast to lend credibility to that theory, claiming he had no idea Jordan played so poorly the game prior, and detailed how difficult it was to defend an aging Jordan when the tendency was to sit back in revel in his greatness.

When asked about losing to #MichaelJordan, @BaronDavis recalls "Man, that shit was crazy." 😂🤯

“Man that shit was crazy.

I mean, because you’re just sitting there watching. You’re like, ‘Damn, he killing.’ And you forget what team you’re on. This motherfucker out here doing everything.

And the coach [Paul Silas] had to call a timeout. He was like, ‘What the fuck is wrong with everybody?’ He was like, ‘Ya’ll can’t leave this dude on an island.’

I think it was Lee Nailon at the time, and I had to go, ‘Lee, my bad, dawg. That’s my fault, I should’ve been helping, I was over here watching dawg. Goddamn, my fault.’

Then I tried to guard him but I remember Stacey Augmon saying before the game, ‘He’s going to have one of them nights. You can just feel it.’

[MJ] just decided, alright everybody else think it’s a game. I’m about to play like my life depended on it.’

It was just magic. This dude looking at it totally different.

I wish someone would have told us he had six points the night before. We sure needed the internet back then.”

MJ leapfrogged Karl Malone to become the oldest player in history to record 50+ points in a game.

38 shots. A shot a minute. Now he quite literally owns the Charlotte Hornets. What a beautiful sociopath you are, MJ.

Listen to our entire interview with point God Baron Davis below. We discuss the wizardry of John Stockton, Baron choosing UCLA over Duke, posterizing Vin Baker and AK-47, and much more. We love him. You will too.