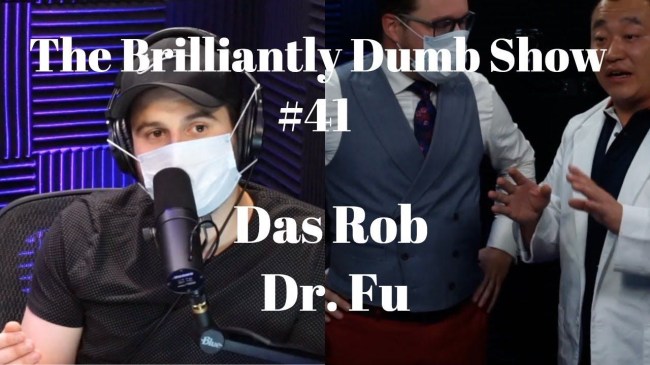 Another release of The BrilliantlyDumb Show today, which means another recap from my end. The more I watch this episode, the more I can’t help but think the episode was something straight out of The Howard Stern Show.

The show starts off with co-host Joey Cold Cuts and I discussing our trip to Animal Planet’s very own Forrest Gallante’s house in Santa Barbara. We go over the bizarre feeling of what it was like to eat chips and hummus at a dinner table while all different types of animals such as snakes, pigs, turkeys and more surrounded us. The recap is as wild as the episode is that will be releasing next Tuesday.

Friend of the pod and hardcore German native “Das Rob” then comes on to the show to discuss his thoughts on the differences in what it’s like living in the States, compared to “The Motherland”. His triple breasted gray suit with red pants is something that simply can not be ignored.

Then, all hell breaks loose as Doctor Fu, an expert in Chinese medicine and an 8-time Tai Chi world champion, joins the show. Doctor Fu is given the tough task of fixing Das Robs broken back in time for our 6 AM tee time the next day. While I only thought Dr. Fu would be performing a couple exercises on the big German’s back, he had other plans as he brings needles and more on the show to make an attempt at getting the young man swinging the golf club the next morning.

It is an episode that you are not going to want to miss with a cast of characters that are hard to fathom. For some more madness, be sure and stay tuned for our episode premiering with Animal Planet’s Forrest Gallante on Tuesday.