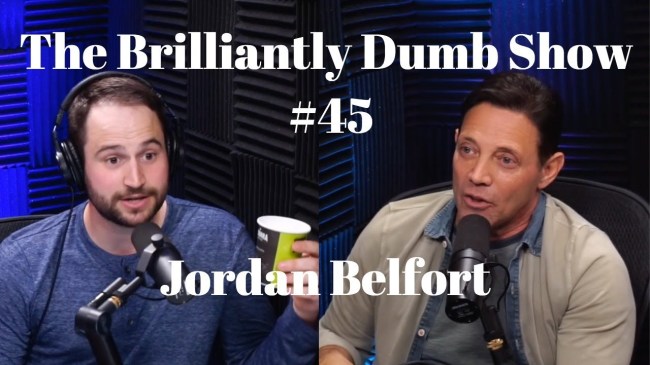 Could you imagine a movie being made about your life and you had to make a crucial decision between Brad Pitt and Leonardo DiCaprio to play you? That’s the decision Jordan Belfort had to make before the movie Wolf of Wall Street was filmed. That is Ali vs Frazier type shit, two heavyweights in the movie industry going toe to toe to get their hands on a script.

You know there is really no wrong answer, but how much does it have to suck to say no to one of them? I’m pretty sure Hollywood would give me the option of Jack Black or Kevin James, which isn’t bad, but definitely not as flattering as Brad Pitt.

Belfort joined me on The Brilliantly Dumb Show to discuss his wild, rambunctious lifestyle that caught the eyes of Martin Scorsese. From his drug use to his first meet and greet with Margot Robbie, he left it all out on the table. He is definitely a guest that doesn’t have any limits what so ever on the types of questions you can ask him. A ball of energy that does not have much of a filter, which made him a perfect guest for The Brilliantly Dumb Show.