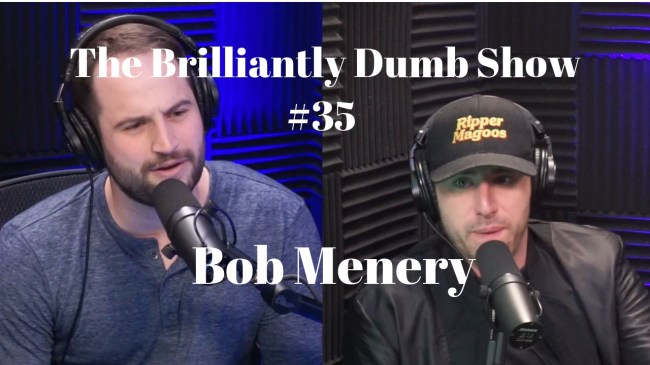 Some know Bob Menery as the Instagram star, some know him as the voice of Buffalo Wild Wings or the funny sports commentator. Anyway you know the guy, the bottom line is, he is an absolute wild card. A total gunslinger, nothing is off-limits and you just never know what is going to come out of the guy’s mouth. That is exactly why I decided to get him in our studio for Episode 35 of The BrilliantlyDumb Show.

This interview was as raunchy and carefree as we were hoping for. The interview starts off with Bob discussing his Super Bowl weekend in Miami where he watched his co-host of his Ripper Magoos podcast  ‘Timmy Bounce Back Bader’ put Robert Kraft into a headlock at a star-studded dinner table that included names like Meek Mill and Michael Rubin (Timmy was then asked to leave as you can imagine.)

I then asked Bob to elaborate on what It was like to live with NFL star Saquon Barkley for four months at an LA Mansion in the offseason. We then transition into what his experience was like sitting next to the one and only Dan Bilzerian courtside at a Lakers game. The stories are about as wild as you can imagine. The show starts and closes with a segment about Bob’s new ’60-day sobriety challenge’ which is interrupted by me taking out a 16 Oz tall boy of Bud Light and crushing it right in front of his face.

The BrilliantlyDumb Show continues to deliver heater after heater, episode after episode, every Tuesday and Friday. Stay tuned for Friday’s episode as we sit down with “The Real Bros of Semi Valley’ star Jimmy Tatro in a tell-all interview about his hit show and claim to fame from youtube videos to the big screen.