What Chris Pratt Joining ‘Thor: Love And Thunder’ Means For The MCU’s Future 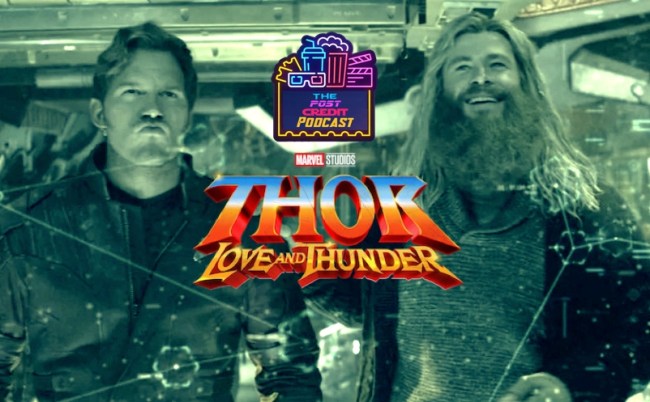 We’ve got a PACKED episode of The Post-Credit Podcast this week, as we dive into the news that Star-Lord will be appearing in ‘Thor: Love and Thunder’ and make predictions about what they expect from the film, before hopping into the new trailer for The Snyder Cut and the news that Terence Winter exited The Batman prequel series on HBO Max and who they’d like to see take over. Then, for the main feature of the episode, we dive into our massive retrospective of the Star Wars sequel trilogy as they look back at The Force Awakens, The Last Jedi, and The Rise of Skywalker.

As for the news that Chris Pratt is joining Thor: Love and Thunder, his impact on the film, and therefore the film’s general impact on the Marvel Cinematic Universe, will be dictated by where Thor stands in his personal journey.

If Thor: Love and Thunder is set to be Chris Hemsworth’s final “leading” performance as the God of Thunder, then expect Pratt to play a role similar to the one Tony Stark played in Spider-Man: Homecoming. No offense to Star-Lord, but his inclusion brings an inherent sense of silly lightheartedness that would be incongruent with what amounts to Thor’s swansong. Not only is Thor the first Avenger to get a fourth solo film, but he’s effectively the last vestige of the O.G. Avengers, not counting the ancillary Hawkeye and Hulk.

Thor’s also been the dramatic focal point of the MCU in recent years, as its his struggles with guilt and regret across Infinity War and Endgame that provide the saga’s most poignantly dramatic moments. A character of this stature deserves a send-off of epic proportions that do justice by the Thor character and weighing the film down with a Star-Lord sideshow could hinder that.

That said, if this isn’t Thor’s last go-round, then I’d happily accept a sort of buddy-cop film in the same vein of Thor: Ragnarok, as Marvel Studios obviously believes in the chemistry and dynamic between Thor and Star-Lord that was discovered in Infinity War and continued in Endgame.

Pratt’s casting also signals the newfound direction Marvel Studios seems to be taking in their post-Endgame world: now that they’ve reached such dramatic and cinematic heights, putting the various pieces back in place to build towards another grand team-up film on that scale is going to take some time. So, instead — as evidenced by Black Widow, Doctor Strange 3, Spider-Man 3, and Thor 4 — Marvel is opting to make standalone films that will feature more than one Avenger (Hawkeye will appear in Black Widow, Scarlet Witch will appear in Doctor Strange 3, Doctor Strange will be in Spider-Man 3, and Thor 4 will obviously feature Star-Lord).

Either way, regardless of what form the film ultimately takes, with Taika Waititi in charge and a cast that includes the likes of Hemsworth, Pratt, Natalie Portman, and CHRISTIAN BALE, Thor: Love and Thunder promises to be one of the most uniquely entertaining entries in the MCU yet.