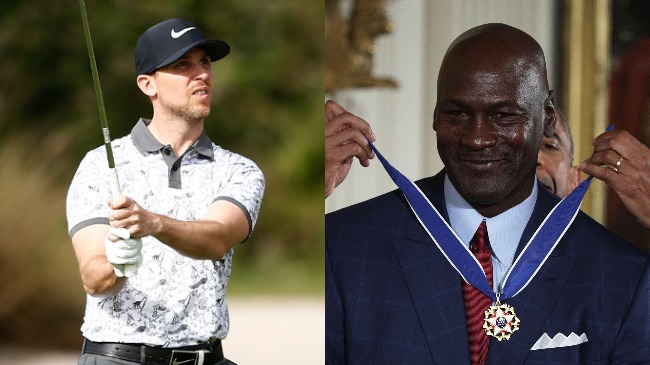 I guess the AIM profile of middle school crush was right after all: ~*~ Lyfe is but a strand of happy accidentz~*~

This explains why one of the most highly-anticipated NASCAR partnerships ever was born out of fake news and a sarcastic DM, a full 11 years after Michael Jordan summoned Denny Hamlin during halftime of his Hornets game to pick his brain about the racing strategy he utilized weeks prior.

Two’s company, three’s a party, so the pair went out and recruited Bubba Wallace to round out 23XI Racing, which is basically Team Avengers.

Denny Hamlin joined our Endless Hustle series to discuss how his DM to Jordan in response to a bogus article claiming the two are going into business ultimately became a self-fulfilling prophecy.

There’s a saying, I think it’s from philosopher Michael Scott: “You miss 100% of the shots you don’t take.”

When Michael Jordan calls you on the golf course after you jokingly slide into his DMs, you abandon your mint tee shot.

Them the rules. @NASCAR's @DennyHamlin would know.

When he received the partnership call from Jordan:

“I’ll never forget where I was and what I was doing. I was actually on the 9th hole at a golf course. I left my ball sitting in the middle of the fairway. I drove up to the green because I was on the phone and I absolutely forgot to hit my ball. I was so excited with the conversation that was going on.”

On Jordan’s competitiveness on the golf course and relentless speed of play:

“The guy’s just ruthless. I mean, he has no pressure…he’ll make a 30-foot putt on you when you think you’re counting your money winning that hole and he’ll make something that’s just incredible to keep himself alive.

He’ll start at 9 and he’ll start his second round by 1 and he’ll be done by 4/4:30. He gets in 36 most days. He handles all his phone calls and stuff like that early in the morning with his team, and then he goes out to the golf course. He’s got good speed when it comes to golf. He doesn’t mess around. His golf carts at the course run about 35-40 mph. You can get a round done pretty quick with him.”

Oh and another itty bitty perk about being a Jordan athlete is that you get a sample of every single shoe sent directly to your door, the rarest included.

One of the perks of being a @Jumpman23 athlete is the endless supply of kicks.@NASCAR star and Sneakerhead @DennyHamlin reveals his favorite Jordan shoes of all-time.

Fireproof suede is hard to come by.. We have several different color variations but this is the material and shoe it’s cut from. Special dye to match @fedex colors. @nascar #nbakicks @Jumpman23 https://t.co/R8CMGRPskv pic.twitter.com/BJ30egFR4V

Catch our entire interview with Denny Hamlin (and Patriots’ Lawrence Guy) below.