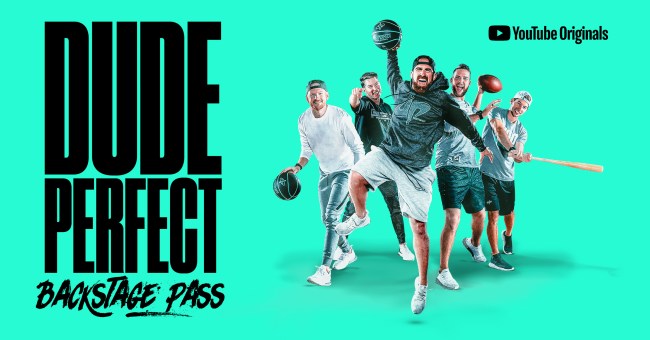 The boys from Dude Perfect recently sat down with The BrilliantlyDumb Show to discuss their new documentary on YouTube that takes you through their rise to internet stardom. This week, YouTube Originals released Dude Perfect: Backstage Pass – a feature-length documentary that follows the wild ride of YouTube superstars Dude Perfect on their first ever Live Tour!

The documentary is now available to stream for free, only on YouTube.

Just five kids from Texas A&M that started doing trick shots for fun. That “fun” turned into over 50 million YouTube subscribers and billions upon billions of total views on their social media platforms.

When Dude Perfect started to become a household name and their bank accounts were ready for it, they decided they needed a factory of their own. A factory to work every day in and produce content, inspired by Rob Dyrdek’s Fantasy Factory from the hit MTV show, Rob and Big.

Tyler from the Dude Perfect team discussed the mega factory the team created in Frisco, Texas.

“You mentioned Fantasy Factory, that truly was kind of the inspiration for us. But we wanted to “sportify” it a little bit, so we said we have to have a football field, a basketball court, hockey rink and all that. I think the office in it self has helped us project this to another level.”

Like Dyrdek, the teams factory has led to hours and hours of content that their fans seem to not get enough of. They have one of the most loyal fan bases out there as they have transitioned their work into live shows, which has been a great way for fans to come see and interact with the Dudes in person. Be sure you check out their youtube channel and documentary that has just been released on youtube.

Watch Dude Perfect and Big Game Bob only on The BrilliantlyDumb Show:

LISTEN TO THE PODCAST HERE