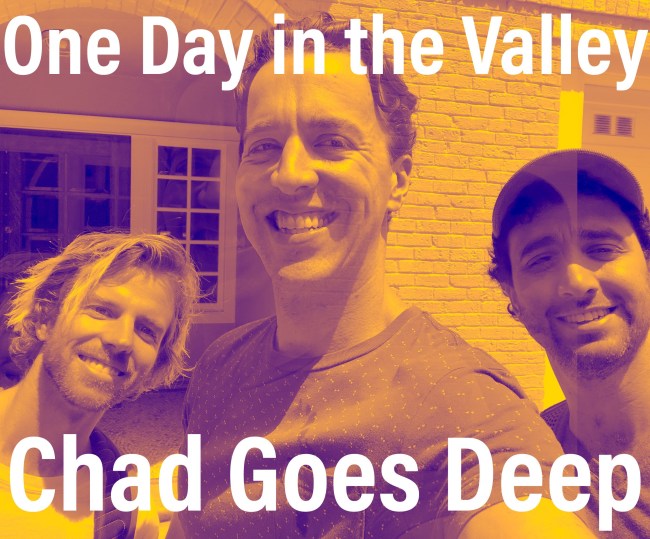 Every week on Oh Yeah, Oh Yeah: The Entourage Podcast I like to book a guest who has a special relationship or connection to the episode. Sometimes they’re comedians, other times they’re authors, in the case of some more musical episodes I’ve had music experts on. So when it came to the ultimate SoCal episode of the show, Episode 2 of Season 3: One Day in the Valley, I had the ultimate SoCal bros back on the show: Chad Kroeger and JT Parr of Chad Goes Deep.

Chad and JT’s stock has been on a meteoric rise as of late, and I was fortunate enough to record with them in person back when they were in my hometown of SF last month. Just last week, they made an appearance on The Howard Stern Show and debuted a new clip.

Watch Chad and JT (@chadgoesdeep) propose a new #IndependenceDay-themed holiday to the Manhattan Beach City Council: “The day President Bill Pullman said in one loud voice, 'We will not going quietly into the night, dudes.” #July2🇺🇸 pic.twitter.com/E7xfK5Y6R6

We had a blast discussing Aquaman’s premiere, Drama’s focus on hydration and Vince and the squad attending high school parties. It’s funny, because when the episode aired back in 2006 we didn’t remember thinking a bunch of celebrities hanging out at a high school party was strange. Looking back now though…it’s pretty weird.

This episode is iconic for many reasons, and Chad and JT are icons in their own rights. We talk about the music of the episode, Ari’s wife pestering him for sex (a nice change of pace from traditional television norms) and Vince’s ‘Almost Famous’ moment.

I’m not going to ruin the episode for you, but this one’s an all timer. If you didn’t hear Chad and JT’s first appearance on the pod, I had them back in Season 2 for My Maserati Does 185.

Take a listen below and leave us a 5-Star review if you like what you hear! Next week we’ve got Dom on the scene and a great guest lined up. Enjoy!