Eric Andre Recalls How Furious Lauren Conrad’s Publicist Was After The Infamous Vomit Interview, And How Jimmy Kimmel Plays Into The Saga 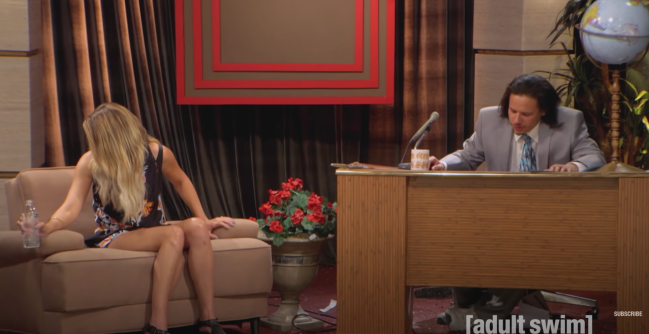 [Note of Interest: If you have not seen Eric Andre’s prank comedy Bad Trip, change that this weekend. It is inventive, deranged, heartfelt, hilarious, and the #1 movie on Netflix right now. At one point I had to stop the movie because I was cackling so hard.  Highly recommend.]

Before Eric Andre was producing and starring in full-length movies, he was vomiting on a flimsy desk in front of your favorite Laguna Beach babe and absorbing career destruction threats from an irate publicist. Showbiz, baby!

The Eric Andre Show creator joined our Endless Hustle series to discuss his infamous 2014 interview(?) with Lauren Conrad that will serve as a roadmap for the future of Journalism.

.@EricAndre recalls the infamous 2014 V🤮MIT interview with Lauren Conrad on @adultswim's The Eric Andre Show, her publicist going scorched earth, and how @JimmyKimmel helped him get vindication. 😭

“The best ever was when I interviewed Lauren Conrad and I vomited during the interview. Then I ate the vomit off the desk and she walked out of the interview. She stormed off, she left the stage. Her publicist threw a shit fit, and was all pissed off and was like, ‘I’m going to have you banned and Adult Swim banned and everybody’s going to be banned. She’s burning down the house.”

The vomit was later revealed to be oatmeal, but try telling Lauren that. Like her publicist, she reportedly “wanted blood” afterwards. Understandable, she looked to be one whiff away from projectiling a full helping of avocado toast.

Andre then reveals how he secured Jimmy Kimmel to come on the show after finding out his son was interning on the Eric Andre Show for four months and not telling anyone he was related to Time’s World’s 100 Most Influential People. All it took was a simple email and Jimmy said he could be there the following morning. That’s when it got interesting.

“And he goes, ‘Yeah, let me just CC my publicist real quick and you can just set the whole thing up with her. It was the same publicist company as Lauren Conrad’s company. And they just had to eat their words and just go, ‘What time would you like Mr. Kimmel to show up?’ They were so angry. They went from banning me to cordially scheduling.”

Moral of the story: Don’t let one workplace vomit derail your dreams. Keep at it and you too can have the #1 movie on Netflix. #StriveForGreatness.