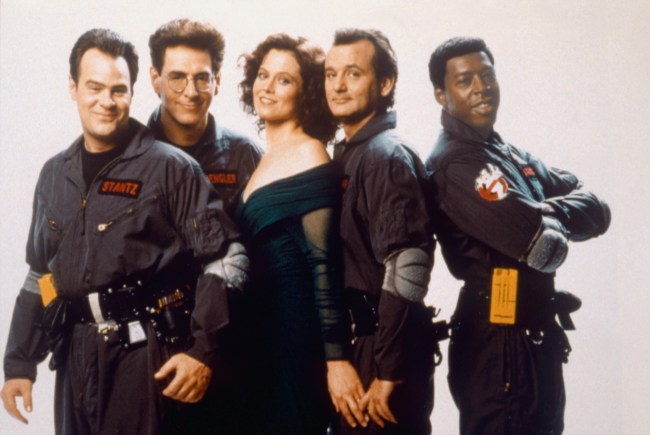 The movie Ghostbusters is so powerful that 35 years later, Dan Aykroyd is still in character.

In September, Aykroyd appeared on the Joe Rogan Experience to detail the encounters he’s had with ghostly spiritys, or as he calls it, “residual energy of people who’ve lived there in the past.”

Aykroyd claimed to millions of listeners that one night, he felt a depression in the mattress and a form next to him. Instead of being freaked out, as a typical human would, he “nuzzled up to it and slept like a baby.”

Ernie Hudson aka Winston Zeddemore joined our Endless Hustle show to describe an X-rated scene that hit the cutting room floor of the original Ghostbusters for obvious reasons.

“Danny’s brother writes on the movie and he actually wrote a scene where we go to the firehouse and we spend the night and during the night and slips under the covers and gives him head.

So they filmed that and somebody thought maybe it’s not such a good idea. So that never showed up in the movie.”

Hudson then goes into Aykroyd’s unwavering and generational belief in the supernatural and the “fifth dimension.”

The 75-year-old then launched into a story about Bill Murray and why one should never accept a gift from him.

PSA: If Bill Murray ever offers to pay for your Thai massage, for the love of God, do not accept. @Ernie_Hudson with the cautionary tale.

“As a gift to me and the other cast members, he got a Thai massage for us and everybody else backed out. But I’m like, ‘It’s Bill.’ It was kind enough of him to do that so I’ll go. We ended up shooting late and then I got to the hotel about one in the morning and there’s a Thai lady standing outside the door with a table. So I go in and she starts this massage that is so painful and I’m too embarrassed to scream because I’m a guy.

When she finished we go out to the hallway and Bill is out there with his lady and he says, ‘Hey Ernie, wasn’t it great?’ I’m like, ‘Ehhhh.” He says, ‘Hey ladies can you come back in the morning at 8?’ It’s already 3 o’clock in the morning. And she does this thing and I’m in such pain and when it was over my wife said, ‘Oh my God, you’re bleeding.’ They had broke through the skin. I have scars on my back now.

I love Bill. He’s full of surprised, but don’t accept the Thai massages.”

Listen to our entire interview with Ernie Hudson below. We talk about his new movie REDEMPTION DAY (now available in select theaters, on digital and on demand), his role in The Basketball Diaries, Leonardo DiCaprio’s It factor, bizarre requests he’s received on Cameo, and Ghostbusters: Afterlife, out June of this year.