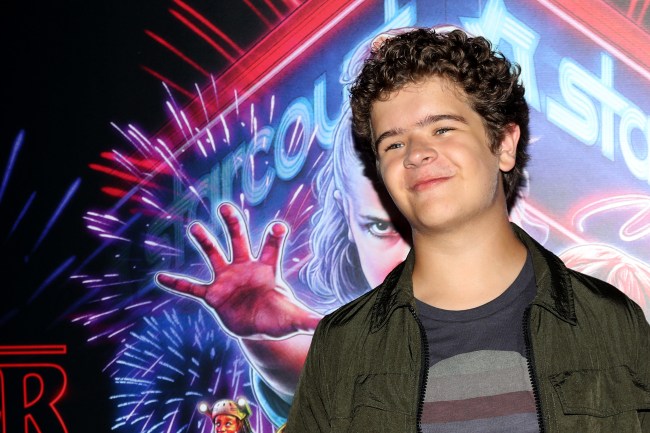 Season 4 of Stranger Things has yet to be given a release date no thanks to the giant stick C****-19 has thrown in the spoke of its production schedule, but the characters seem genuinely thrilled about the darker tone the series is expected to take.

David Harbour went on record claiming the fourth iteration of the show is his “favorite” for his character, Jim Hopper, as his character devolves from a protector to a prisoner—“This season is my favorite because he really is going to show you some new colors and what he’s really made up of.”

Gaten Matarazzo told Jimmy Fallon that season 4 may be the “scariest” yet, and claims his character Dustin will take a much more mature tone.

We spoke with Gaten, who is also the host of Netflix’s Prank Encounters, about Harbour’s comments about Season 4 being his favorite, and the 18-year-old agreed, primarily because the production team doesn’t have to handle him with kid’s gloves.

.@GatenM123 on why Season 4 of #StrangerThings is his favorite yet and how turning 18 in showbiz is a whole different animal.

“I’ll agree with [David] from definitely a work standpoint. I’ve had a lot of fun working on this season. Probably because it’s the first season where I’m no longer a minor. There’s no child labor laws protecting me anymore. So there’s no limit to the work hours that you can have in a day, which is stressful.

Compulsory education laws in Hollywood mandate that the education of the child actor not be disrupted while the child is working, and the child completes his or her schoolwork under the supervision of a studio teacher while on the set. Gaten is free from those shackles, and is digging it.

“The days feel like they’re going faster honestly, because I think it has to do with now I’m not sitting waiting for a specific time. Like you get to work at a certain time and you know you’re going to be leaving legally at that time.

For us, when I was 17, it was I think 10.5-11 hour limit. So if I get there at 8 AM, I know I’m going to be out of there by 8 PM. I was always checking my watch. But now that I can just be there as long as they want me to be there, I’m not checking the time. And so I guess it just goes by a little faster for me, even though I’m working on average takes 15 hours.”

Check out the trailer for season 2 of Prank Encounters on Netflix. Out NOW!

And our full interview with Gaten Mattarazzo (and MTV Challenge’s Johnny Bananas) below.