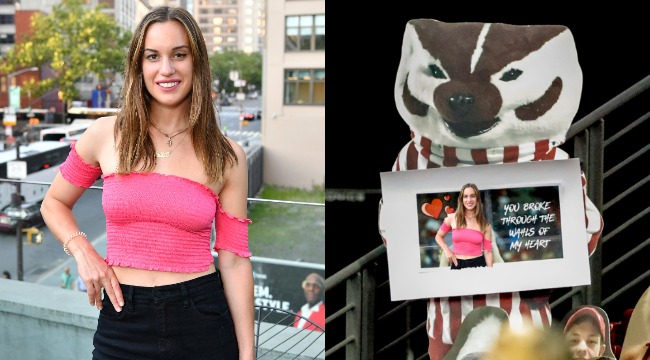 Since Bucky the Badger emerged from the woodlands in 1940 and limped onto the U-Wisconsin campus with nothing but the striped shirt on his back, physicists have been baffled at how it’s possible to stuff that much swag into one suit.

Bucky’s prominently featured at Wisconsin football games banging out pushups after each touchdown, completing a panty-dropping 573 in November of 2010 for beating up on Indiana 83-20.

Hannah joined our Endless Hustle to clarify a sultry love affair with Bucky that first broke on the Call Her Daddy podcast. Fellas, find you a girl who talks about you the way Hannah Berner talks about short-legged furry omnivores.

BUCKY THE BAD LITTLE BADGER.#SummerHouse's @beingbernz remembers a steamy love affair with the mascot while in college at U-Wisconsin.

"Bucky has so much swag, he's so confident, he's so sexy." Legend.

“There’s seven or eight different Bucky’s. Because Bucky is like the star. Bucky has to do a charity over here, he has to be at a Wisconsin game there. He’s all over the place. So there’s like seven of them, and they train in the morning, and that’s how we got to know them. And they know who they are, but the larger people don’t.”

Hannah goes on to claim that Bucky must adhere to strict guidelines while in public, and must somehow deflect all the lady undergarments being flung in his direction.

“But I would see Bucky at like a tennis match and I wouldn’t know if it was him or another one of the guys. So I would try to do something, but they were under strict [rules]—they can’t talk, they can’t do any weird signals, they all have the same character. But Bucky has so much swag. He’s so confident. He’s so sexy. And they were much smarter and funnier than the athletes I was seeing, so I highly recommend the mascot.”

If Mascot Diaries isn’t green-lit to run after the next season of Summer House on Bravo, what are we even doing?

Check out our hilarious interview with Hannah Berner below and don’t forget to peep the season finale of Bravo’s Summer House this Thursday. (Also, bonus CM Punk interview).