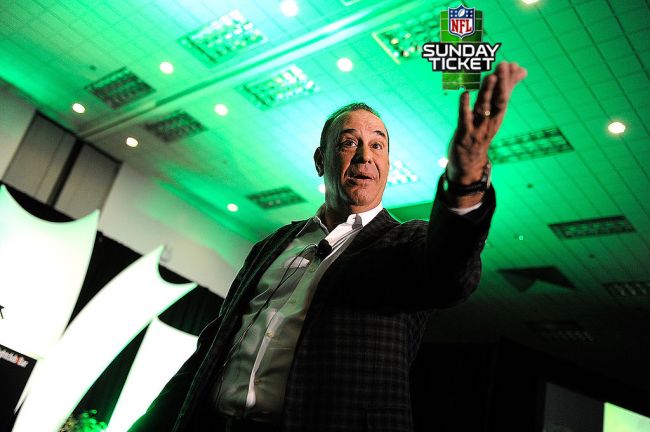 Last month, it was reported that behemoths such as Apple, Disney, and Amazon are in a bidding war for the NFL’s Sunday Ticket package, a subscription covering every game that is not airing on local affiliates, after it’s contract with DirecTV expires in 2022.

NFL Sunday Ticket, which costs about $300 for a season-long subscription, currently draws upward of 2 million subscribers and DirecTV pays $1.5 billion annually to the NFL for the rights, according to USA Today.

The impetus of the subscription service dates all the way back to 1994, when Sports Bar Operator of the Year Jon Taffer was tasked with creating the model that would ultimately become the multi-billion dollar belle of the ball 25 years later.

Taffer joined our Endless Hustle to discuss how it all went down.

THINGS YOU MAY NOT HAVE KNOWN:@jontaffer is the mind behind @NFL Sunday Ticket.

He tells the incredible story on our @endless__hustle.

Jon, America owes you a cold one. pic.twitter.com/7HfPAlHq87

“Years ago, I won Sports Bar Operator of the Year in the mid 90s and it was a company named COMSAT.

They came up to me and said, ‘Jon, we want to buy out-of-market sports signals for football games. So I want somebody in New York to be able to buy the Dallas Cowboys signal and watch it on their TV in New York. Will you do a feasibility study for us on whether the bar and hospitality industry will buy football signal of out-of-market sports programming?’

So, we signed a very lucrative contract, then we did a market study and a feasibility study. We determined that the industry would in fact, buy such a thing. And at the industry average capacity and what the profit margins were that the industry could afford to pay a certain amount for it. And we deemed it as very viable.”

Intrigued, COMSAT called Jon back a couple weeks later and commissioned him to create a product model, writing him another check.

“When we were doing that, compression happened. Compression is a satellite technology of compressing signals that allowed you to receive 7 or 8 games on one transponder.

Before that, a sports bar had to have 8 of those huge analog dishes. You needed like a half-acre behind your bar to be able to do that.”

On the backs of compression satellite technology, Jon and his team designed a whole premise around multiple games, ad slicks, merchandising, marketing, and industry promotion. Jon delivered the work to COMSAT, who came back to him a third time tasking him with figuring out who would buy it.

“We put together a list of operators across the country as to who we thought would buy it.

COMSAT then took my three pieces of work, brought it to the NFL to license the signal from the NFL. NFL read the stuff and said, ‘You know what this is pretty good. Let’s do it ourselves.’

So they put me on the Advisory Board of NFL Enterprises and we turned it into and rolled out NFL Sunday Ticket.”

"Everybody who sees me in that maniac mentality, I want you to understand it's deliberate. I'm often not that mad, but they need to think I am."

Check out our entire interview with Taffer below and tune into his new podcast The Jon Taffer Podcast wherever you pod.