Kenny Smith Reflects On The Legend Of Coach Dean Smith: ‘It Was Like Playing For Gandhi’ 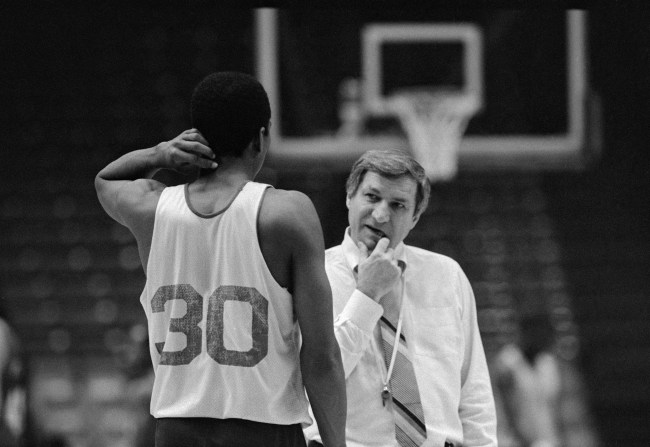 Find you someone who fawns over you the way Kenny Smith fawns over Dean Smith.

The North Carolina coach died in February 2015 from a progressive neurological disorder three weeks before his 84th birthday, gifting a $200 check in his will to every former letterman who played for him in his 36 years at Chapel Hill to “enjoy a dinner out.” The trustee revealed that 180 players received the check, amounting to a $36,000 gift as a final act of integrity in a life that epitomized it.

Kenny “The Jet” Smith, who joined Michael Jordan as a freshman at UNC in 1983 and ultimately would become an All-American under Smith, appeared on our Endless Hustle podcast to describe who the Hall of Fame coach was beyond the game.

Find you someone who talks about you the way @TheJetOnTNT talks about the late Dean Smith.

“It was an out-of-body experience playing for him. It was like playing for Gandhi. It wasn’t playing for a basketball coach. It was a life lesson every day. It was a cerebral thought process. It was not about basketball. When I think about Coach Smith and the 10 things I think about, two of them are basketball. Two of them. They’re basketball related, but it’s not like a game and he goes, “Oh,” and he draws up this magnificent play. It’s all about life lessons that he used to say that related to the sport or just related to life. Those stick out way more. I talked to him more after I stopped playing. I would just call him and I’m like, ‘Coach, this is going on in my life, what do you think?’ It was like talking to Gandhi, it really way.

He brought in Charlie Scott, the first African-American player at North Carolina. He could have sold me on recruitment by just saying that. He never mentioned it! Never! Like at all! In his whole life, he never said that to me. I had to read that when I got there. That’s the type of person he was. In terms of social justice, he was just way ahead of his time. Basketball, way ahead. Life, way ahead. Unbelievable experience, man. You would have loved it.”

Charlie Scott would later reveal that during a big game against South Carolina in the late 60s, Dean Smith needed to be held back by assistant coaches from confronting a fan who hurled a racial slur at Scott. Scott said this was the only time he ever saw Smith get truly upset.

Listen to our entire interview with Kenny Smith below. He talks about the JET ACADEMY, his innovative new virtual basketball camp for kids of all ages, Charles Barkley’s extreme generosity and OCD, the intricacies of TNT’s Emmy-winning ‘Inside the NBA,’ LaVar Ball’s sperm, his dunking prowess, and more.