Kevin Garnett Snatching Glen ‘Big Baby’ Davis’ Soul In An Arm Wrestling Match Was The ‘Most Insane Thing I’ve Ever Seen,’ According To Brian Scalabrine 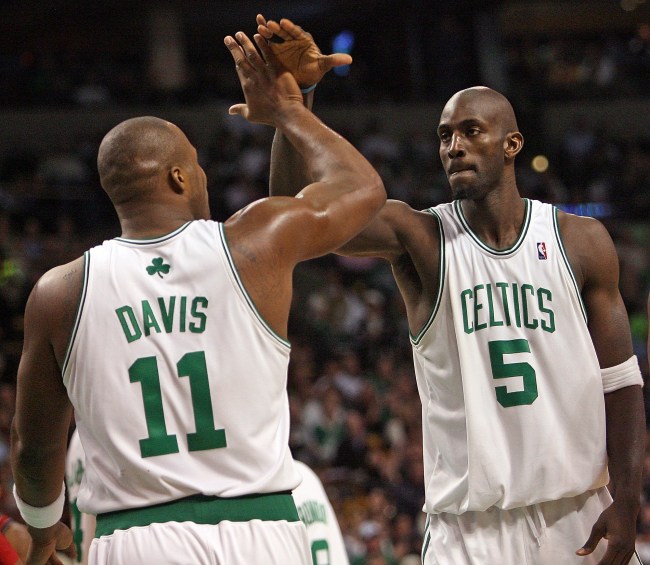 “If you took a group of psychologists and had a conversation with us, the psychologists would write down: This team is nuts. They all need to be on medication right now.“

-Brian Scalabrine on the 2008 Boston Celtics

Doc Rivers crowning achievement in his 20-year coaching career was riding the maniacal mechanical bull that was the ’08 Celtics without being thrown into the stratosphere, never mind winning a title with them.

Brian Scalabrine, the founder of Scal’s Vodka Lemonade, joined our Endless Hustle to add to the legend of that iconic squad, opening up about an arm wrestling match that deserves it’s own four-part docuseries.

The entire Celtics team, save for Paul Pierce, put thousands of dollars on Big Baby winning easily. Paul Pierce won a lot of money that day.

"It was the most insane thing I think I've ever seen." – @Scalabrine

They don't make 'em like that 2008 @celtics team anymore. pic.twitter.com/IL6KERRQrP

“Glen ‘Big Baby’ Davis was crushing everybody. I arm-wrestled him. It was like, ‘Go! Bam!’ Eddie House, Posey, I mean anybody and everybody. He just rolled through everybody.

All the sudden we’re on this flight home from Toronto and KG’s like, ‘Let’s go Funk, let’s do this.’

Garnett was peeking Big Baby in all these games even though he acted like he was disinterested.

As they start, Garnett just stares at Big Baby. He’s like, ‘I ain’t moving, Funk. I ain’t moving.’ It was like the ultimate rope-a-dope from Kevin Garnett to Big Baby and he was just like wearing him out.’

And by the way, he’s sweating profusely. I mean it is like coming down.”

Scal then claimed that when Garnett made a tiny advancement in the match, he snatched Glen Davis’ soul and belief in himself.

“He slams Big Baby down. He gets up, he’s like: ‘I’m the Alpha male in this bitch! Don’t ya’ll ever forget it! AHHHHHH!’

Sweating and spitting everywhere. Paul Pierce is counting cash. And this is like a Thursday for the 2008 team.

But that is Garnett’s will. That is how he believes in himself. It was nuts, man. It was the most insane thing I think I’ve ever seen.”

Check out our full interview with Scal below and go drink some delicious Scal’s Vodka Lemonade!