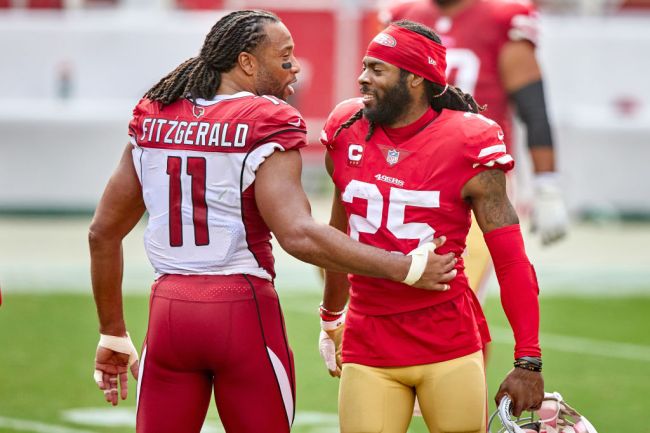 Larry Fitzgerald sat down with Harold Varner III and George Savaricas on the first episode of the Rippin’ It podcast and touched on a number of interesting topics. The all-time great wide receiver shared the story of Tiger Woods being the first person to ever put a golf club in his hands resulting in him becoming a full-blown golf addict, he touched on retirement and revealed the hardest hit he’s ever taken on the football field.

Fitzgerald was also asked the interesting question of which situation would be more intimidating for him: standing on the first tee box at a golf course getting set to take on Varner III or going head-to-head with Richard Sherman. Without hesitation, Fitzgerald said teeing it up against HV3 is far more intimidating.

“Harold on a tee box, for sure,” Fitzgerald said. “I’m trained to be able to play against Richard Sherman. I’ve watched the tape and I actually feel like I can, at times, be able to make things happen, make plays. But, you know, at the tee box, if [Varner III] doesn’t give you shots, you don’t have a chance of winning, and that’s demoralizing.”

Q: What's more intimidating: @RSherman_25 standing across from you or @HV3_Golf on a tee box?
A:#RippinIt, pres. by @BroBible debuts Tuesday! Our first guest, @LarryFitzgerald had plenty to say about golf, football, and life. #WeHere | @GeorgeSavaricas pic.twitter.com/P88ZydNhRy

Fitzgerald’s explanation makes sense from his own point of view, but for all of us out there that aren’t 11-time Pro Bowlers, it’s tough to wrap our minds around the fact that playing golf is more intimidating for some than going head-to-head with a 6-foot-3 cornerback.

Be sure to check out the entire interview with Fitzgerald and subscribe to Rippin’ It on Apple Podcasts, Spotify, and YouTube.