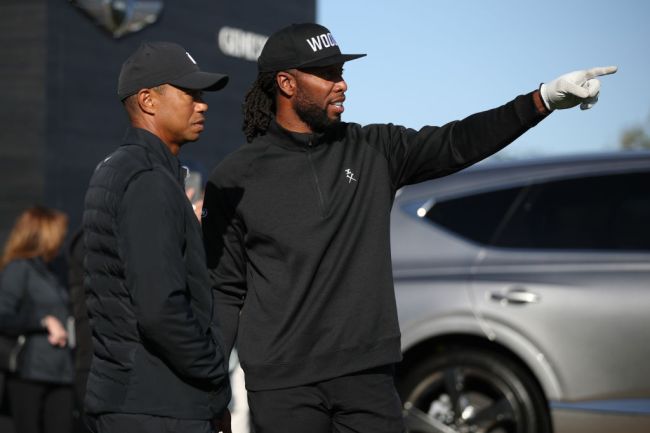 The time is finally here, the first episode of the Rippin’ It podcast with Harold Varner III and George Savaricas has arrived. The guys welcomed none other than legendary wide receiver Larry Fitzgerald as their first guest and touched on a wide range of topics including Fitzgerald’s love for golf, his NFL career, his thoughts on retiring from football, and much more. Fitzgerald also shared an incredible story about how he first got involved with the game of golf.

Most people’s introduction to the game is pretty bland. More often than not, it’s a family member or close friend that introduces you to golf. Or perhaps you got the itch from watching Tiger Woods dominate for so long or you gravitate toward a certain player and get the itch to go play. That wasn’t the case for Fitzgerald, however.

Fitzgerald’s story about being introduced to golf does involve Tiger, but on a far more personal level than anyone could possibly imagine.

Fitzgerald was a guest on the inaugural episode of the Rippin’ It podcast with Harold Varner III and George Savaricas and shared that the first time he ever held a golf club was when Woods one in his hand.

“I remember the first time I actually got a golf club put in my hand, was Tiger Woods putting it in my hands up there at Hiawatha Golf Course,” Fitzgerald explained. “He was up there for the first tee program and that was kind of like when I really kind of fell in love with the game.”

“So I would watch all the time, watch the Masters every April with my dad, get up super early to watch the British Open with my dad. We would experience golf, but I never really wanted to play until my boy ‘Dre (Andre Roberts). When I started playing, I hit a whole bunch of really poor shots, but then I hit like two or three and was like ‘man, that’s really nice.’ There’s nothing like a well compressed golf ball going in the direction that you want it to go.”

It was placed in his hands by @TigerWoods. 🤯

Fitzgerald didn’t have an option at that point. If the GOAT hands you a club, there’s no other way to go than becoming a full-blown golf addict, which Fitzgerald is today. Fitzgerald is a two-time winner of the Pebble Beach Pro-Am and has practically played every golf course on the planet, which he talks about during his appearance on the podcast as well.

Be sure to check out the entire interview with Fitzgerald and subscribe to Rippin’ It on Apple Podcasts, Spotify, and YouTube.