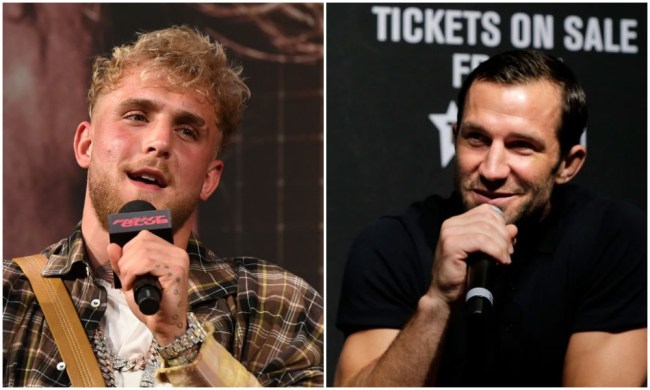 The Rippin’ It podcast welcomed former UFC Middleweight Champion and face of Ralph Lauren’s “Polo Blue” cologne, Mr. Luke Rockhold, onto the show for episode number two and the man did not disappoint.

Rockhold let it fly with co-hosts Harold Varner III and George Savaricas throughout the entire interview. He gave everyone a glimpse into just how shady negotiations can be when it comes to the UFC and offered his bold opinions about Dana White, who is very clearly not his favorite person in the world.

Later on in the interview, the burning question that seems to be coming up more and more often in the fight world was asked: are we going to see you fight the Paul brothers? Rockhold keyed in on Jake Paul when answering the question, and did not hold back one bit.

“Yeah, if they had bigger balls,” Rockhold began. “They know better not to sh-t talk me or anybody else that would challenge their livelihood, their manhood. This guy’s not even marketable. People believe in this kid? He looks like a fool, and he acts even worse.”

Rockhold then went on to address Paul’s odd exchange with Ben Askren during a press event in which Paul slapped Askren on the ass after Askren put his hand in his face.

“He can’t talk on the mic, he can’t act up, he just wears a bunch of fake sh-t, he can’t even represent himself,” Rockhold said. “He gets pushed in the face by Ben [Askren] and he slaps Ben on the ass. Did you guys see this? His initial instinct was get pushed in the face, and then just slap him in the ass, and then he realized, ‘oh my god, that looked bad’ so he pushes him. Do you guys not see what a pathetic human being that is? Come on, you have no space, you have no reason to be in the fight game.”

“These guys are pu–ies and it’s just so apparent and the world is just pathetic…What is the world coming to. People think these YouTube kids are real fighter and they think that these insecure little TikTok kids are famous? When you meet these kids in person, their energy is just pretty sad.”