‘The Mandalorian’ Recap And Review: “Chapter 15: The Believer” 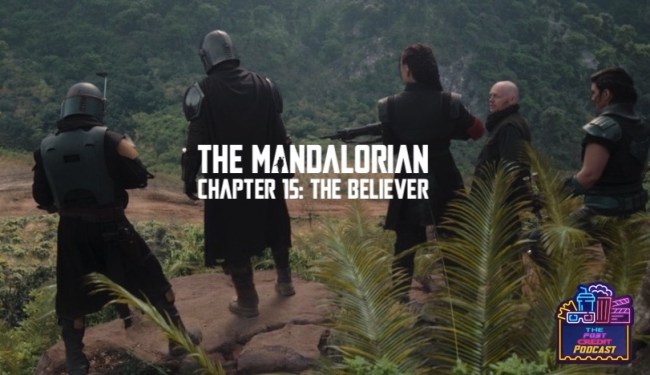 Although it feels like this season of The Mandalorian just premiered yesterday, we’re already at the penultimate episode, as “Chapter 15: The Believer” marked the second-to-last entry in season two. As we do every week on the Post-Credit Podcast, we did a deep dive breakdown into the latest episode, reacting to everything from Mayfeld’s newfound humanity to Mando’s electric episode-ending message to Moff Gideon.

Once again picking up right where last week’s episode left off, Mando and Cara Dune head to pick up Bill Burr’s outlaw character Mayfeld, who’s currently a prisoner of the New Republic, spending his days working at a scrapyard.

Mayfeld, initially and hilariously mistaking Boba Fett for Mando, tells the crew that the only way he can help is if they take him to a hidden Imperial rhydonium refinery on Morak, where he can access an internal Imperial Terminal to get the coordinates of Moff Gideon’s ship.

Upon arriving on Morak, Mando elects to accompany Mayfeld into the refinery, but in order to do so, he must take off his Beskar armor in order to remain disguised. After hijacking one of the rhydonium transports, Mando — without the usual protection of his Beskar and arsenal of weaponry — must defend the ship from an seemingly endless wave of local pirates, who are attempting to destroy the payload. Mando and Mayfeld narrowly escape thanks to the help of TIE Fighters as they finally make their way inside the Imperial refinery.

Once inside, the pair go to access the internal terminal, which is located in the Stormtrooper’s mess hall. Mayfeld takes off to access the terminal but is forced to turn back after he realizes he recognizes one of the superior officers in the room — his former commanding officer Valin Hess. Mayfeld says the mission most be aborted as a whole because the internal terminal requires a facial scan in order to access its data.

Mando, understanding this has to be done in order to recognize Baby Yoda, takes Mayfeld’s place and heads towards the terminal, even taking off his helmet in order to complete the facial scan, marking the second time we’ve seen Mando’s face since the series began.

He is confronted by Hess, but Mayfeld intervenes and pretends that Mando is hard of hearing. After a tense drink where Hess insults dead soldiers from Operation: Cinder, an angered Mayfeld — who was involved in that battle — shoots Hess dead in the middle of the mess hall, prompting him and Mando to high-tail it outta there. Mayfeld and Mando fight their way onto the roof, where they are covered by the sniper fire of Fennec Shand and Cara Dune, allowing them the time to board Boba Fett’s Slave 1 ship.

On their way out,  Mayfeld destroys the refinery with a well-placed sniper shot while Boba destroy two pursuig TIE Fighters with a seismic charge last seen in Star Wars: Attack of the Clones. Thanks to both his help on the mission and his growth as a person, Dune lets Mayfeld go free, claiming he “died in an explosion on Morak”. Then, in the final, electric moments of the episode, Moff Gideon receives a hollow message from Mando, who threatens him using the same words Moff Gideon did in season one and vows to rescue Grogu.

Once again, the Kill Count record for this season has been shattered by this episodes, as Mando and Bill Burr’s Mayfeld quite literally kill upwards of 100 enemies after they destroy the ISB refinery with a well-placed sniper shot on their way out.

This is the first episode in the history of The Mandalorian to not feature Baby Yoda. Sacrilegious. If he isn’t safe Mando’s arms by season’s end, we riot.

While there weren’t any references to the Jedi this week, we do get some further lore about Mandalore during the conversation between Mayfeld and Mando.

“You really think that all of those people that died in wars fought by Mandalorians actually had a choice?” Mayfeld asks.

As we’ve long theorized on the podcast, we believe the future of The Mandalorian series could see Din Djarin and his fellow Mandos take back the fallen planet of Mandalore, which has long been inhospitable due to decades of war.

Mando fighting off the pirates (without the help of his handy Beskar) certainly deserves a shout, but I’m going to cheat this week and submit the Inglourious Basterds-esque standoff in the Imperial mess hall. A gun is technically fired, so sure, we’ll call it action, but what it really is, is the episode’s dramatic high-point.

When Mandalorian sends that hollow message to Moff Gideon, warning him that he’s coming for Baby Yoda, he repeats the exact words Gideon said to him in the penultimate episode of Season 1.

“You have something I want. You may think you have some idea of what you are in possession of, but you do not. Soon, he will be back with me. He means more to me than you will ever know.”

#TheMandalorian: "Moff Gideon, you have something I want."

Bill Burr! Just when you thought Disney and The Mandalorian couldn’t flex on us any harder, they go and bring back a generally meaningless character from season one’s worst episode (and, so far, the worst episode of the series) and make him key to the plot while also having him deliver philosophical musings that push Mando closer towards personal growth. And he convincingly carried his dramatic moments. Hell of a week for Bill Burr.

me: man, #TheMandalorian has been pretty great, not sure there's much else they could do to impress me.

Disney: we are going to bring back Bill Burr's character from the worst S1 episode and have him do a riff on religion and morality as if he were performing at one of his shows pic.twitter.com/5F28bJdSAh

As I’ve been saying all season, the introduction of a Lightsaber-proof Beskar Spear means on thing and one thing only: we’re getting a duel between Mando and his spear vs. Moff Gideon and his Darksaber. BRING. IT. ON.