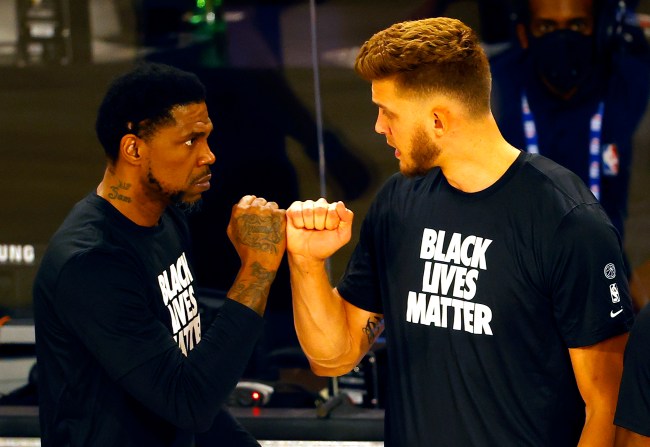 Long before glass backboards and three-point lines, there was Udonis Haslem.

At 127 years old, Udonis can wax poetically about the 1949 NBL merger of Sheboygan and Waterloo folding up into the BAA, a time when the league’s stars resembled chess champions and moonlighted as bootleggers for supplemental income.

For nearly two decades, Haslem has been as much ingrained in Heat culture as tanned, middle-aged men in white linen shirts who leave at halftime to catch their reservation at Makoto.

In June, Erik Spoelstra expressed his deep admiration for the 40-year-old forward, calling him a “beacon of leadership” and a respected voice in social justice issues.

There are very few, if any, who evokes more respect as a man than the three-time NBA Champion, and Miami Heat center Meyers Leonard recently confirmed that.

When asked on our Endless Hustle podcast (subscribe or die) who Leonard would choose as an ally in a street fight, he skipped right over Jimmy B and Bam and without hesitation, said Mr. 305.

He’s got a lost of respect around the league, we’ll just leave it at that.

Everything that he went through when he was younger and then he had to go overseas first and play, and then he comes to Miami which is where he’s from. He had to find a way to make it work.

He leads the Heat in all-time rebounding. That’s crazy. Just think about that for a minute. We’re talking about a guy who’s been with the Heat for 17 years. That’s the definition of loyalty and grind. He is everything that you want in a leader and teammate. He’s very unique and for a guy, like you said, it’s not like people say, ‘He’s the reason they’re winning,’ but trust me when I tell you behind the scenes he’s got a lot to do with why the Heat have won for many years.”

Listen to the full interview with Meyers Leonard below, where we talk NBA and crushing Coors Lights. We also speak with WWE royalty Booker T and Queen Sharmell about Ric Flair, Hogan, the Godfather of Soul, and more!