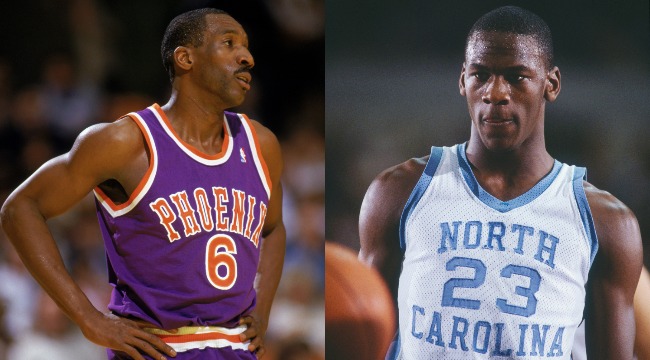 Everything in this world dies except for the universal craving for Michael Jordan stories.

In an appearance on our Endless Hustle, former Jordan teammate Matt Doherty fed us some delectable tales dating back to their days at UNC when the seeds of superstardom were just beginning to sprout and the bottomless cocksuredness (definitely not a word) was being cultivated.

Former UNC stud @DohertyMatt talks about beating MJ in a friendly game of pool in college. Michael did not like this. Not one bit.

Doherty, who’s new leadership book Rebound: From Pain To Passion is out now, recalled the exact moment when he realized Michael Jordan was not of this world.

“The summer after Michael’s freshman year, all the pros come back in the summer time. We’re playing these pick-up games and you have some of the better players in the NBA come back, and one of them was Walter Davis. He has his jersey in the rafters, Number 24. He was an All-Pro for the Phoenix Suns. And Michael is literally giving it to Walter. And I’m saying to myself, ‘Yo Michael, chill. You’re embarrassing Walter.’

That’s when Michael, I thought, took it to the next level.”

What’s wild is that last year, Michael said that Walter Davis was his “idol” and was “one of my two favorite people I grew up watching,” along with David Thompson.

Even heroes have heroes.🐐

There are very few people throughout history who can meet their idols and proceed to physically and mentally dominate them, all before legally being allowed to operate a motor vehicle.

Doherty also dished out some MJ Competitive stories, which in my correct opinion, are the best kind.

“We’re shooting pool on a road trip at UVA and I win. And he looks at the table, takes his pool cue, throws it on the table and says, ‘This table’s not even regulation.’

And then another time we were playing pickup and he calls a foul, like point game, and I was like, ‘No dude, that’s not a foul.’ We didn’t finish the game. We walked off the court.”

Doherty revealed that in college, Michael never eviscerated his teammates, and when he voiced his opinions it was “never disrespectful.”

To bring it all the way full circle, after Doherty was done dirty by UNC in 2003 and forced to re-sign from his head coaching position, guess who called him immediately?

UNC did alum @DohertyMatt dirty in '03, forcing him to re-sign, shaming him at the press conference, & stiffing him on the buyout.

At his lowest point, one of the 1st people to call was his ex-teammate, Michael Jordan.

Check out our full interview with Matt Doherty and NASCAR star Brad Keselowski.