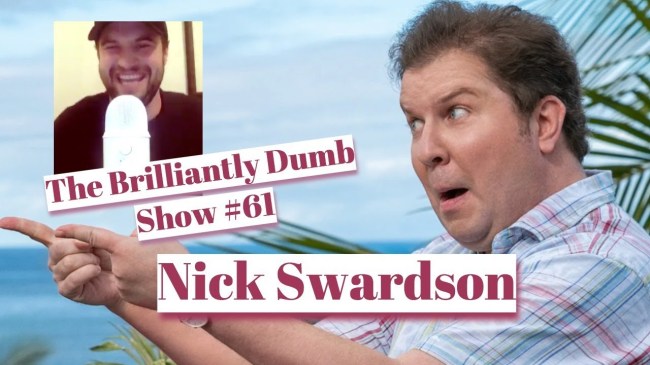 It is hard to imagine America’s favorite sport being played without any fans in the stadium, but that may be a reality when it comes to the 2020 NFL season. I think we can all agree that at this point we just want confirmation of football coming back to us before we can worry about whether or not there will be fans in the building or not.

The NFL could slowly start allowing a limited number of tickets to be sold to assure they are taking proper social distancing measures, but the question is, who and how many fans do you let into the stadium?

Nick Swardson joined The Brilliantly Dumb Show to discuss the state of comedy, co-starring with David Spade in Netflix’s new movie The Little Missy , and his friendship with Adam Sandler that changed his acting career forever. He also had a great idea for how the NFL should handle fans entering the stadium.

“They should just let the drunkest people in, it should be the opposite of a breathalyzer where you got to be over a certain amount to get in,” Swardson so eloquently explained. “You have to be a hot mess, that would be me at every game, I am either not drinking at all or am just ham town shit faced.”

I’ve got to be honest, I don’t hate this idea. The drunker the fan the louder they usually are, which would fill the void for the empty seats that teams were not allowed to sell. Not only that, do you realize how great the side show would be if it’s a shitty game? I think Swardson is onto something, it would truly be one hell of a spectacle.

Be sure to subscribe to The Brilliantly Dumb Show on YouTube and Apple Podcasts.  Don’t miss Swardson in The Wrong Missy which was released on Netflix on May 13.