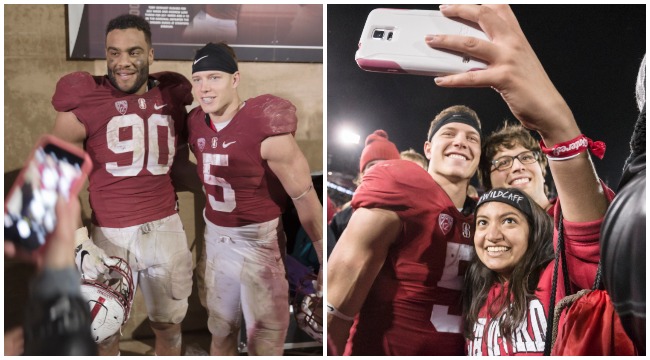 Can you imagine sitting in class with a guys like Solomon Thomas and Christian McCaffrey and NOT begging them to get matching tattoos with you? Can you imagine treating them like just another slouch, like the kid with a rat tail and gingivitis? Can you imagine valuing education and an insatiable desire to make the world a better place over amateur athletics?

While schools like Alabama and LSU are essentially football institutions with occasional required reading, NFL defensive tackle and Morris Trophy winner Solomon Thomas claims Stanford students treated the football team like nothing more than potential customers for their next soulless Silicon Valley app.

Ok, maybe that’s an exaggeration, but they certainly aren’t this kid.

Crying Texas kid cussing up a storm is your college football meme of the yearpic.twitter.com/3rfdbO06Of

Thomas joined our Endless Hustle Podcast presented by Boston Market to discuss. Keep in my, during Thomas’ sophomore year, Stanford finished the season 12-2, was a top 5 team and won the Rose Bowl.

SEC schools treat their football players like Gods.@sollythomas90 reveals that at Stanford, things operate a bit differently. Even if you're shattering NCAA records like Christian McCaffrey.

“I would say Christian McCaffrey is the only person I’ve seen get any limelight on campus and even for someone like him, he didn’t get that much, or as much as he should have.

I mean he was supposed to be a Heisman-winning running back. He’s in class and sometimes people don’t even budge. It’s just that kind of campus. Everyone kind of treats everyone like they’re a regular person. Of course there were some people, but it wasn’t anything crazy. It was definitely a ‘We’re at Stanford’ moment. We’re not at an SEC school or a big school or anything like that.”

Agree. What a bore.

Listen to our entire interview with Solomon Thomas (and Fox Sports’ Erin Andrews) below: