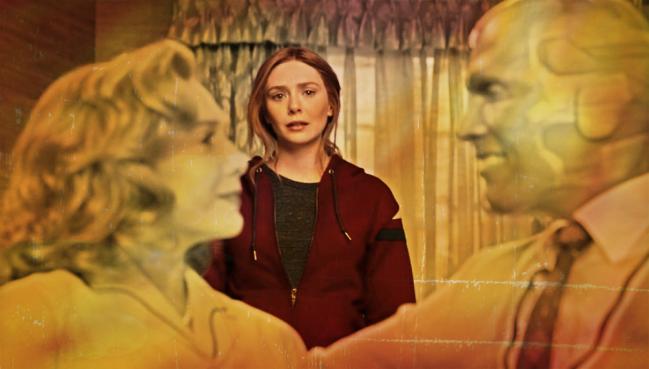 Regardless of your opinion of its quality, one element of WandaVision that’s remained undeniable throughout its eight-episode run is its sheer uniqueness.

The Marvel Cinematic Universe, for all of its quality, has long been derided for its formula, its similarity, its inherent copy-and-paste nature. From the second WandaVision premiered, its primary strength has been the exact opposite of that trend, upending traditional MCU norms with every passing episode, its penultimate entry especially.

Warning: spoilers for episode eight of WandaVision will follow.

Think back on Infinity War and Endgame, and how those films served to close the arcs of Tony Stark and Steve Rodgers, arcs that had been a decade in the making. “You’re not the guy to make the sacrifice play, to lay down on the wire and let the other guy crawl over you,” Cap tells Tony in The Avengers, only for Iron Man to do exactly that, on behalf of the entire universe, seven years later in Avengers: Endgame. The Marvel Cinematic Universe, for its famed lack of compelling villains, has a remarkable grasp of developing characters over time, Vision and Wanda included. But while the likes of Tony and Steve and Natasha and Thor were grown over time, over the course of multiple films, Wanda’s odyssey of a life is traversed in just one day in “Previously On”.

The underlying question propelling WandaVision thus far — more so than who Agnes is or what’s wrong with Dottie or which misplaced background element might actually turn out to be Mephisto — has been “how did we get here?” How did Wanda get here, both literally and emotionally? How did Vision’s body make its way from a Wakandan forest to a S.W.O.R.D. operating table? How have things gotten this bad? How do we get out of here, and how do we heal? WandaVision‘s penultimate episode sought to answer those questions by taking us through the lived experience of the MCU’s most broken hero.

From her war-torn childhood to her shady government experimentation to the loss of her soulmate, the only thing in Wanda’s life greater than her immense, reality-shaping powers are the tragedies that have spurred those powers on. Known for their quips and their third-act hole-in-the-sky endings, the Marvel Cinematic Universe, for all of its dramatic prowess, has never necessarily been known for eliciting heartbreak (outside of the aforementioned Infinity War and Endgame, of course). But in watching that montage of a childhood Wanda, laying on the floor with her family as black-and-white images of the American promise land flash across her decades-old television screen while gunfire crackles in the street below, the emotion was as overwhelming as anything the MCU has provided, as you not only imagine what it must be like to be her, but what it would be like if that was you.

While an imperfect comparison, this week’s #WandaVision reminds me of “The Door” episode from ‘Game of Thrones’, wherein we’re provided devastating emotional context via a third-person voyage through time that reframes how we comprehend a previously misunderstood character. pic.twitter.com/qlHTHxg4BR

And that’s this episode’s ultimate accomplishment: “Previously On” embeds you into Wanda’s lifelong trauma so thoroughly, so deeply, that you finally begin to understand not just her perspective, but the answer to the questions this series has been asking all along: how did we get here? How have things gotten this bad? How do we get out, and how do we heal? WandaVision might not deliver on the narrative twists we’ve been hoping for, but as an examination into heartbreak and the places it leads you, there’s no question it’s a triumph.

The season finale of WandaVision will hit Disney+ on Friday, March 5.