Three Teens Caught A 1,000-Pound Bluefin Tuna Fishing Off Cape Cod That Was So Big It Barely Fit In The Boat 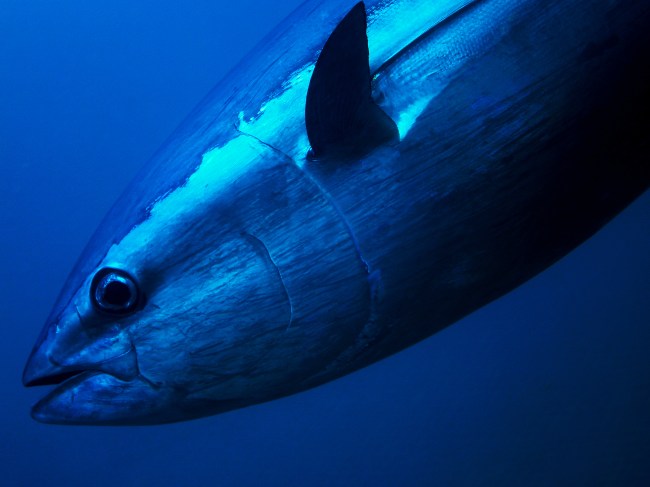 The thing about fishing for a world record is it has to be one angler on the rod and reel the entire time or it doesn’t count but that’s not how it has to be done if you’re just out there fishing for fun. Three teens took turns battling this 1,000+ pound Bluefin Tuna caught last week off Provincetown at the tip of Cape Cod.

The teens were fishing with Captain Daniel Smith Jr who runs the Julia Nicole charter boat out of Provincetown along with mates Kyle Falle and Jim McCormack. They initially thought they’d hooked a massive shark because it was so heavy but about half an hour into the fight they caught a glimpse of the ‘grander‘ Bluefin Tuna and realized they had a special fish on the line.

Speaking with local news WCVB5, the crew said they knew that there was a ‘beast’ on the line but they weren’t sure what it was until they caught a glimpse of the elusive grander: “The first word that came I think to all three of our minds is ‘beast’. This thing is an absolute beast,” Smith said. “When we hooked up, there’s nothing like it,” McCormack said. “This is the biggest adrenaline rush, we’re all going crazy.”

Captain Smith Jr. said it’s typical for a Bluefin to bend the rod in half and scream off drag when they take a bait but they thought it was a big shark on the line. With some fish you can count a ‘catch’ when you touch the leader but for these guys, it’s not an ‘official catch’ until that fish is on the boat’s deck. That presented a problem with the 1,000+ pound Bluefin Tuna which was over 10-feet-long and barely fit on the boat’s deck because it was so massive. Here’s a look at this truly enormous fish.

They were able to get the fish onto the boat eventually and the three teens sold the Bluefin Tuna to the fish market. Hopefully, they saved a meal or two for themselves.

I’ve never caught a Bluefin Tuna myself, mostly because I was born/raised in Florida and it’s pretty rare to catch a Bluefin on purpose. They do pass through the Gulf Stream at various points in the year but it’s not a species you can reliably target and I haven’t had the chance to fish in the Northern Atlantic yet where the species is prevalent.

If you are curious what a 1,000-pound Bluefin Tuna looks like underwater there’s this cool video of underwater footage from Prince Edward Island a few years back that’s always making the rounds. It’s an interesting perspective on just how powerful and gigantic these grander tuna can be.

If you are interested in booking a charter with the Julia Nicole Charter boat you can click that link to visit their Facebook page where they have all of their contact information and you can find out about rates before the weather gets too cold to fish.