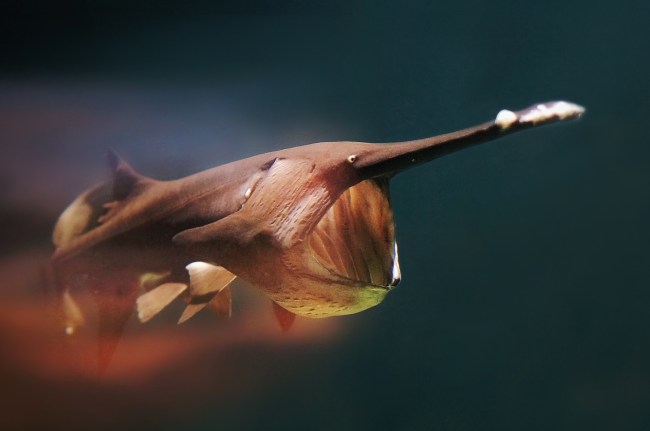 An Oklahoma fisherman just landed himself a new world record after catching a 146-pound-11-ounce American Paddlefish. Miraculously, this broke an existing fishing world record that was set just one month ago. Usually, fishing world records stand for years if not decades so to see one broken twice in a month is pretty amazing.

The Paddlefish is one of the coolest looking species of fish out there. They are practically living dinosaurs and classified as ‘primitive fish’ because the species has barely evolved in the past 120-125 million years since their earliest fossil records.

Check out this dinosaur caught fishing in Oklahoma this past weekend:

Possible new world record paddlefish was snagged from Keystone Lake. Weighing 146 lbs. 11 oz., the paddlefish caught by James Lukehart beats the world record by more than 2 pounds. Under the guidance of ODWC the fish was released & monitored after taking official measurements. pic.twitter.com/vJxybSIPtv

Here’s the previous world record Paddlefish which was caught in Kansas just a month ago:

The previous world record paddlefish weighed 144 pounds and was caught in Kansas. It was a good run, Mr. Boldridge! Congrats to the Okie angler that bested it! https://t.co/0dH2b4cZ9X pic.twitter.com/jlaqbjFJNW

It’s almost like someone attached a chainsaw to a manatee.

According to TulsaWorld, angler James Lukehart caught the world record paddlefish on Sunday while fishing with a Keystone Lake guide:

Lukehart said he is “more of a hunter” but his wife, Caitlin, loves to fish and so he only recently got back into fishing. Last year they went to Missouri’s Lake Taneycomo for rainbow trout.

“The trout fight, but it was nothing like this,” Lukehart said of the barrel-like, prehistoric fish that measured 70.5 inches rostrum-tip to fork of the tail and sported a 45-inch girth.

“It was exciting,” he said Sunday afternoon. “It’s only been about four hours since we caught it. My wife filmed everything and I’m finally watching the video. My facial expressions, and I don’t think I said anything too improper, it was just total excitement.”

Last Winter a 157-pound paddlefish was caught which would break this existing world record by 11 pounds but it’s an ‘unofficial’ record because it was never weighed on a certified scale. So there’s still a MASSIVE one swimming around out there.

An interesting aspect of Paddlefish is they don’t bite a lure and the fishing world records aren’t kept by IGFA:

Mefford has dialed in on a snagging technique using Garmin LiveScope sonar that has proved invaluable in snagging the fish with barbless treble hooks, as well as in monitoring the fish for successful release.
…
…
Because paddlefish are not a “sport fish” that takes a lure or bait and must be snagged, there is no category for them with record keepers like the International Game Fish Association. Instead, these records are noted by biologists in scientific literature. Schooley said he likely will be published with the American Fisheries Society. (via TulsaWorld)

The American Paddlefish is a ray-finned fish that’s closely related to sturgeon which helps explain why they look like armored Pokemon and they are found primarily throughout the Mississippi River Basin and ‘adjacent Gulf slope drainages’ which more or less extends from South Dakota to Kentucky and south through Louisiana. They are known by all sorts of names including the Mississippi Paddlefish, spoonbills, and spoon-billed cats so if you’ve heard those names before then this is the species they were referring to.

For people in the Heartland of America who are catching these fish on the regular, they may not be all that exciting but for the rest of the world, these are a truly spectacular species. They look like living dinosaurs and unlike anything I’ve ever caught before.