The Future Of Women’s MMA? Watch 16-Year-Old Victoria Lee Tap Her Opponent At ONE Championship 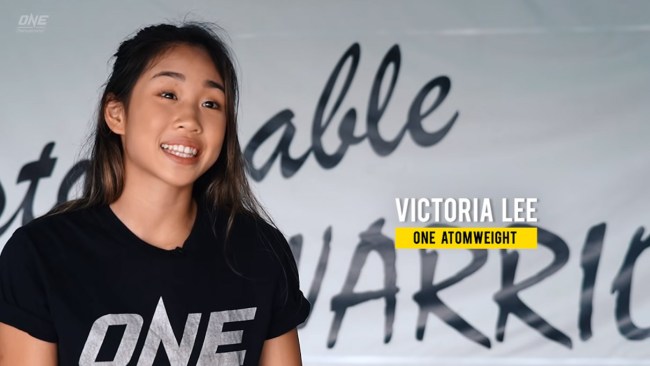 We have seen several excellent contenders to the throne in women’s mixed martial arts ever since Ronda Rousey ran off pouting into the sunset and WWE wrestling rings.

Amanda Nunes has been about as dominant as one can be, but she hasn’t really captured the mainstream media’s attention the way Rousey did. Valentina Shevchenko is kind of in the same boat. Michelle Waterson had her chance, posing for the ESPN “Body Issue.” Unfortunately, that public relations high point was sandwiched between two losses. Paige VanZant started out like a champ (6-1), finished with a fizzle (2-4), and is now bareknuckle boxing. Mackenzie Dern, Valerie Loureda, Isabella Mir, and Claressa Shields have promise, but all still have a long way to go.

So the door is wide open for a female MMA fighter with the charisma and skills to capitalize.

Could that person end up being 16-year-old prospect Victoria Lee, who just made her professional MMA debut for ONE Championship? Maybe.

Victoria, nicknamed “The Prodigy” for obvious reasons, defeated Sunisa Srisen (4-1) with a rear-naked choke in the second round of her debut at ONE: Fists of Fury in Singapore on Friday.

“Things didn’t go according to plan,” Lee said after the victory. “I tried to finish it in the first round. However, we just went back to the corner, my dad said ‘hit the reset button’ and I did what I was supposed to do in the first round, in the second.

“Once I got her to the ground, I was just focusing on my base, got the hooks in, and I saw her head pop up so I went for the neck and I just squeezed.”

ONE Championship asked before the fight, “Are we witnessing the birth of mixed martial arts’ next big star?”

It will certainly be fun to find out.