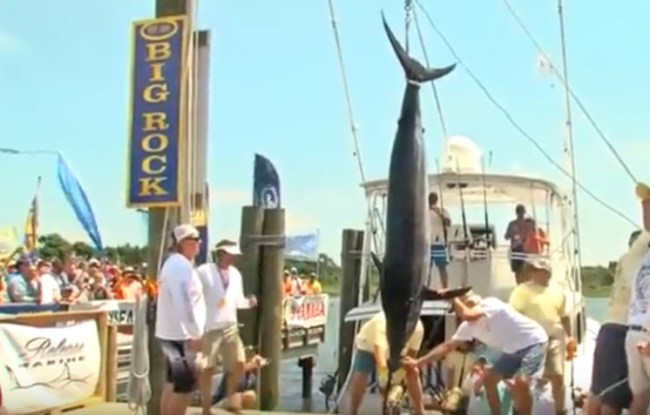 What kind of fish were you reeling in when you were 16-years-old? Crappies and Bluegills? E.J. Nettles is 16-years-old and he landed a 400-pound blue marlin. To boot, Nettles caught this behemoth during a tournament and jettisoned his team into third place.

Nettles, from Charleston, South Carolina, is competing in the Big Rock Blue Marlin Tournament in Morehead City, North Carolina this week. On the third day of the tourney, Nettles reeled in the massive 9-foot, 400.4-pound blue marlin, which three times his weight. The junior angler became the first teen to weigh in a blue marlin in the tournament’s 60-year history.

“It’s an awesome feeling to catch a fish in my first Big Rock and bring it to the scales,” Nettles said. “When he bit, he came up on the left side of the boat and didn’t take the bait at first but then he did and I picked the rod up and fought him for about 45 minutes or so.”

Nettles’ remarkable catch almost didn’t count since the minimum eligibility for a big blue is 400 pounds. Nettles was aboard the Rare Breed, a boat based in Sullivan’s Island, South Carolina. Rare Breed is currently in third place in the tournament of 183 boats and has a shot at $174,300 in prize money. There’s no doubt that E.J. has a pretty promising future in fishing ahead of him.