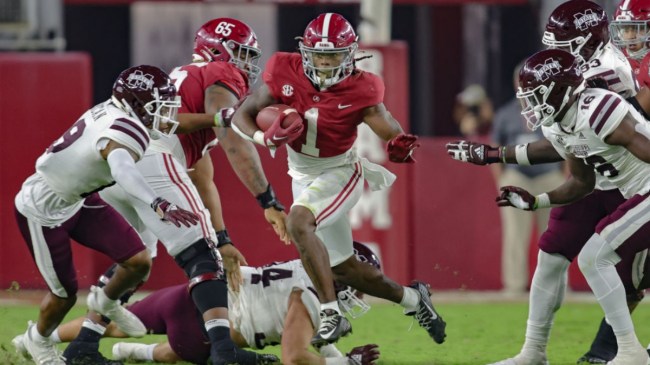 As the final month of the college football regular season begins, fans got to learn where their teams stand in the College Football Playoff rankings for the first time this year.

Every year, this first list usually brings some controversy with it and that is once again the case this season.

The top of the list was never going to be much of a surprise to college football fans. We all knew that Tennessee, Georgia and Ohio State were getting spots in the top 4 with each boasting undefeated records and a particularly strong win on their resumes.

The 4th spot was up for grabs between Michigan and Clemson with both also still undefeated. Clemson ended up claiming that spot. However, the 6th spot was less clear. There is another Power 5 school currently holding an undefeated record that had a strong claim, but there was also a 1-loss Alabama hanging around.

Alabama got that 6th spot.

THE TOP 25 CFP RANKINGS HAVE ARRIVED‼️ @Vol_Football leads the pack at No. 1️⃣ pic.twitter.com/7lj5qo00d3

This isn’t a huge surprise because of the credit that Alabama gets for being Alabama, but it’s really hard to see the argument on this one.

TCU has beaten a pair of teams currently ranked in the top 20. Alabama has a win over the 24th ranked team and lost their only other game against a top-25 opponent.

Luckily for TCU, the first set of rankings doesn’t really mean much. It really just gives teams a chance to see where they stand as they head into their last few games.

Unfortunately for TCU, this ranking means that they will likely need Alabama to lose again to have a shot at the playoff even if they win out.

As things stand, one of Tennessee or Georgia will probably be eliminated this weekend when they play each other for the top spot in the SEC East. If Alabama wins out, they’d pick up wins over LSU and Ole Miss along the way to the SEC title game where they would once again almost be guaranteed a spot in the Playoff with a win.

That could set up the SEC to have two teams in the playoff while the Big 10 champion and Clemson get the other 2 spots and TCU is left on the outside wondering just what they have to do to get into the playoff.

That would be an unfortunate way for such a successful TCU season to end.