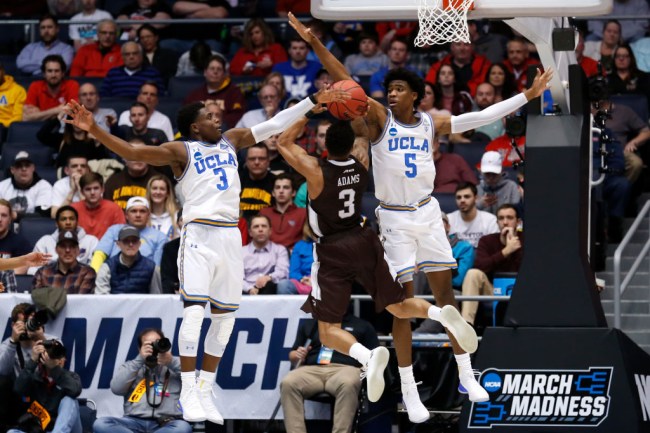 The best weekend in college basketball is upon us, so let’s cut to the chase and get to helping you fill out your 2018 NCAA Tournament Brackets. I’ve gone ahead and broken this advice into fours, starting with four upsets that have the best chance of happening. Good luck!

Four First Round Upsets That Will Happen

New Mexico State over Clemson: Clemson is only 7-5 in their last 12, primarily due to the fact that their best player Donte Grantham injured his knee in January. New Mexico State is primed for an upset as they beat Miami earlier this year by nine points, showing they can topple top competition. They also have a legitimately good defense, ranked 8th by Kenpom, and four of their top five leading scorers are upper classmen. In a game that’s expected to be a rock fight, turn the ball over to Zach Lofton in the final minutes and you should be ok.

Providence over Texas A&M: The Aggies had one of the best teams in the country on paper at the beginning of the year but a lot has changed since November. This is also expected to be another low scoring game as both teams have solid defenses, so I’ll take the team that has three seniors and a junior as four of the teams’ leading scorers. Providence is has length and athleticism to match A&M and is feeling good about their play after reaching the Big East final.

Loyola-Chicago over Miami: You probably don’t know much about Loyola-Chicago since Wichita State left the Missouri Valley Conference this year and the conference lost most of its luster. Loyola-Chicago quietly won 15 of 18 conference games including every game against teams with an RPI of greater than 100. They also own a win at Florida from earlier in the season. How can they be this successful? Mostly in part to their 40% three-point shooting percentage and the diversified scoring of five guys averaging at least 10 points a game. With Miami being one of the worst free throw shooting team in the country, those points left off the board will be the difference as Loyola-Chicago bombs themselves to a win.

Kansas State over Creighton: Don’t let the Big 12 semifinals fool you. Kansas State was missing their best player for the whole game and their second best player injured his eye and didn’t play from then on. Even with all that they hung with Kansas for most of the game. Kansas State has one of the best defenses in the Big 12 and should be able to shut down Creighton’s explosive offense.

Davidson over Kentucky: Everyone loves the 12 over 5 upset and this is going to be one of the spots people are looking at. Kentucky has to travel all the way to Idaho, which will shut down any home-court advantage they would’ve had east of the Mississippi. Kentucky also might be riding a little too high after their SEC Tournament victory. But there’s only one bunch of Wildcats that can win here and it’s going to be John Calipari’s team. They’ve found their stride winning seven of the last eight after losing four in a row. Their young group is maturing at the right time and they’re adequately balanced with quality offense and defense. They also executed better than Tennessee in last Sunday’s final, showing that they are indeed coming of age.

Stephen F. Austin over Texas Tech: People are going to be on Stephen F. Austin because they almost made it to the Sweet 16 in 2016 and people are seeing their name again. The problem is this is a different bunch of Lumberjacks and thankfully this is a different group of Red Raiders as well. Texas Tech is legit and only tailed off for a few games when Keenan Evans, their best player, was banged up with a bad toe. Texas Tech is diverse enough offensively and can rely on Evans at the end of games if necessary while also relying on the third best defenses according to KenPom to shut down anything the Lumberjacks throw at them.

San Diego State over Houston: The Aztecs got red hot down the stretch while winning nine in a row including defeating Nevada on their way to the Mountain West Tournament. Houston, however, is very similar to Texas Tech in that they rely on defense and have a couple key weapons, including Rob Gray, to generate offense at the end of games. The Cougars let the final of the American Athletic Conference Tournament get away from them, but they’re led by enough upperclassmen to know what the real prize is.

South Dakota State over Ohio State: You really want to add “the” before listing off Ohio State, but I held back. Fortunately for them it doesn’t matter how you label the university this week as they shouldn’t be challenged too badly by the Jackrabbits. SDSU is very offensively diverse, but Ohio State should be able to shut them down while riding their wings of Jae’Sean Tate and Keita Bates-Diop to a win.

Four Teams with a Chance to Win It All

Villanova: Honestly it feels like you can write the same thing about Villanova as you would have the last two years. They had a great non-conference season and then dominated the Big East in the regular season and eventually won the conference tournament. Very few teams can offer six players that score more than 10 points a game, but Villanova can also offer one of the best point guards in the country as Jalen Brunson and also Mikal Bridges, who’s improved so much over the last couple years that he’s ended up being seen as a NBA lottery pick.

Michigan State: The road won’t be easy for MSU as they’re placed against Duke and Kansas before they would even make the Final Four. I feel like Tom Izzo prefers this path, however, as it keeps his guys alert and ready to go. He’s had some of his best success as a coach when not being a #1 seed in a region. They’re ranked 9th in offense and defense according to Kenpom, showing they don’t have much weakness. Miles Bridges has expanded his game and can takeover when the team needs scoring. Foul trouble isn’t really an issue because the team is so deep in the frontcourt and the backcourt.

Duke: On paper Duke has everything. On the court it took them until later in the season to really find their stride as Grayson Allen came out of his shooting slump and their 2-3 zone has made the defense much tougher to score on. They’ve shown they can beat anyone in the country with wins over Michigan State, North Carolina, Clemson, Florida, and Miami. Marvin Bagley is unstoppable on the inside if he’s provided the ball in scoring areas. The bench has even improved over the course of the season. Sometimes there late-game offense doesn’t work as cohesively as it should and sometimes they get a little lazy on defense, but on their best is better than anyone else’s best.

Virginia: As with Villanova, it seems like the same song and dance with Virginia as before. We all know it starts with defense and the fact that they haven’t given up 70 points in a game this year is ridiculous. They’re 12-1 against teams in the top 50 of RPI and lost their two games by a total of eight points. But because of their style, they rarely blow other good teams out because of the fewer possessions played. They’ll need to get all they can from their backcourt of Kyle Guy and Ty Jerome, who specifically has plenty of onions for those late game shots.

Four Teams That Could Shake Things Up

Arizona: The path isn’t easy for Arizona with Kentucky before they even get to the Sweet 16, but their playing like a galvanized bunch since the news broke on Sean Miller’s potential scandal a few weeks ago. They crushed the Pac-12 Tournament and have the best future NBA player in DeAndre Ayton. They just need to tighten up their defense to make the Final Four.

Gonzaga: Despite some turnover from last year’s team that made the title game, Gonzaga is back in a big way. They found their form later in the year, so there’s a slight discussion to be had about the quality of play they’ve faced since the non-conference schedule that led to three losses before January. The talent is certainly there, however, as six players drop at least 9.5 points per game and there’s enough experience on this year’s team from previous seasons’ strong runs.

Michigan: Most people who follow basketball will tell you there are few coaches better with Xs and Os than John Beilein. He gets the most out of his players and while they’re good in quality, he hasn’t been bringing in the best recruits. There are no top 30 recruits on the roster, but no Michigan team ever has trouble scoring with the way Beilein creates offense. The defense is potentially the best in the Beilein era at Michigan, so what more do you need from these guys? I certainly don’t hate Carolina out of this region either and think whoever wins that game should go to San Antonio.

Texas Tech: You might not think of Texas Tech as a basketball powerhouse, but they are this year. Wins over Kansas and West Virginia show they’re legit. Don’t get fooled by their 7-5 stretch over their last ten. Leading scorer Keenan Evans hurt his toe and couldn’t give the team what it needed even though he tried to play through it at first. The team needs him as its dominant scorer, especially when they’re so focused on stopping the opponent. They were right there in the Big 12 tournament and can be right there with any team in the country. They match up nicely with Purdue and then you’d have to see what happens.

BONUS: Four Bets for Round 1

Pennsylvania +14 over Kansas – Kansas was admittedly shook when they saw Kansas as a #16 seed instead of a #14 seed.

Iona +19.5 over Duke – Duke isn’t the same team we trust in early rounds as years past.

Ohio State -7.5 over South Dakota State – Forget this upset. Keita Bates-Diop and the boys are ready to roll as long as long as they’re not playing Penn State

Michigan State +225 to win the Midwest Region – They’ve got a tough road to get there, but certainly have the assets to do it.

Arizona +350 to win South Region – Arizona looks even better head to head against Virginia with De’Andre Hunter out for the year.

Michigan +325 to win the West Region – As you can see, we’re pointing out the teams we think have value to win the region. They won’t all hit, but if a couple hit you’re in good shape.

Gonzaga +2200 to win the NCAA Tournament – Something’s off when Gonzaga is giving twice the price of Michigan to win the whole thing, but they’re getting the same price to win the region. That’s fishy. Take the value.