Shocker: Pretty Much Every NFL Team Has A Legit Beef With The 2019 Schedule Except For New England 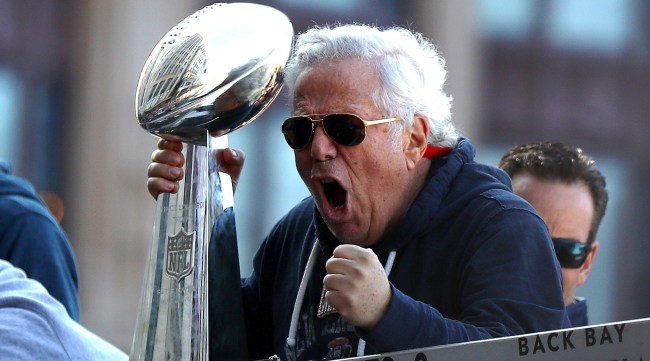 Each team’s 2019 NFL schedules were released to the public on Wednesday night and it worked out better for some franchises than others. Of course the team it worked out best for was the defending Super Bowl champion New England Patriots because why wouldn’t it?

For example… fans of the Oakland Raiders and Tampa Bay Buccaneers are getting completely hosed as their two teams each have gaps of 49 days between home games in 2019.

The @Buccaneers go from week 3 to week 10 without a game in Tampa. Were the schedule makers drunk?

Even worse, the Buccaneers will have to travel around 18,000 miles between Weeks 4 and 9 next year. Their players might as well sublet their homes as little time as they will be spending in them during that time.

As for the rest of the league, the Los Angeles Chargers also have a lengthy stretch between home games, hitting the road after week 9 and not returning to L.A. until week 15, but, well, does it really matter where they play?

Miami and their rookie head coach Brian Flores get to start the 2019 NFL season against four playoff teams: the Ravens, Patriots, Cowboys and Chargers. They also have an VERY unfavorable Week 5 bye, all of which will make their tanking plan that much easier.

Green Bay will be the only team in the league to play a road game after a road Monday night game, plus they also finish with four of six games on the road.

The Tennessee Titans play four of their first six games on the road.

The San Francisco 49ers and New York Jets have a bye in Week 4, meaning they will be playing football for a minimum of 12 straight weeks. Good luck with your knee, Jimmy Garoppolo.

The Denver Broncos play nine games against teams that were over .500 in 2018, and amonf the sub-.500 teams they play are the Jaguars, Packers, Browns and Bills – all who could realistically finish over .500 in 2019.

The Saints have to play back-to-back West Coast games against the Rams and Seahawks.

The Colts have to play the Chargers, Chiefs, Steelers and Saints on the road.

The Philadelphia Eagles have to play three consecutive games on the road versus the Vikings, Cowboys and Bills.

The Bengals and new head coach Zac Taylor open with Seattle and have to play three of their first four games on the road.

Meanwhile, depending on which metric you use to determine strength of schedule, the defending champion Patriots have either the easiest or second-easiest road to the playoffs.

The NFL schedule releases tonight, but we already know the opponents. Here is 2019 Strength of Schedule based on current rosters (not 2018 records): pic.twitter.com/fU78e0KfU2

From easiest to toughest… Ranking EVERY team's strength of schedule in 2019! pic.twitter.com/kFimkoVH08

The Patriots are favored in 15 games … and have the easiest schedule according to @The_Oddsmaker’s ratings.

See how the difficulty of all 32 teams’ schedules stack up:https://t.co/gSjTdJy2kf