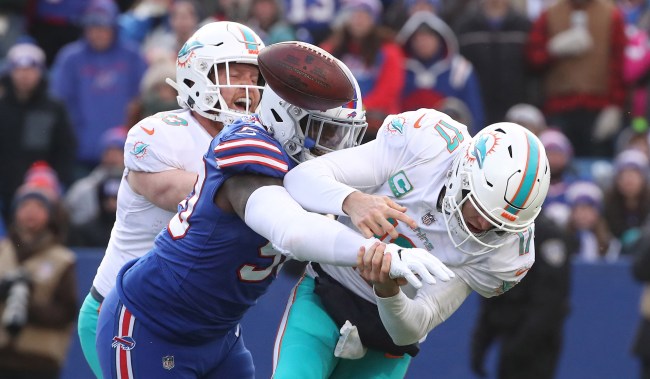 Well, this news out of Miami certainly isn’t going to help out with all of the “NFL is rigged” conspiracy theories.

The Miami Dolphins, who have been saddled with being in the AFC East, have finished first in their division only once and second six times, making the playoffs just twice, over the past 18 seasons. (The length of the reign of Tom Brady and Bill Belichick.)

So, with the Patriots back in yet another Super Bowl, and with Brady and Belichick apparently in no hurry to retire, you can’t really blame the front office of the Miami Dolphins to start thinking about taking some drastic measures in order to compete.

But tanking an entire season in order to be able to draft a franchise quarterback drastic? That appears to be the case if you believe a couple of longtime sports columnists of the Miami Herald, Armando Salguero and Barry Jackson.

That's fine. Then tank for someone else. The point is the Dolphins are tanking.

Everyone I speak to behind the scenes tells me so. https://t.co/wsvc7PIORe

This was reinforced to me, too, this week. Nothing can get in the way of losing next season! As Armando coined, Tank for Tua https://t.co/yzIEb1uHag

Not sure I would tank an entire season for Tua Tagovailoa, but hey, I’m no NFL general manager.

The Miami Herald reported Sunday that the Dolphins are prepared to move on from Tannehill after seven seasons instead of paying him the $19 million he’s owed each of the next two seasons and carrying a $26.6 million cap hit next season. None of that money is guaranteed.

By cutting or trading him, the Dolphins would clear out $13.2 million in 2019 cap space. It could be $18.7 million in cap savings if he’s released as a post-June 1 designation, but that would come with another dead money hit in 2020.

What say you, Dolphins fans? To tank or not to tank, that is the question.

What an embarrassing organization. pic.twitter.com/LaiiUTFdKy