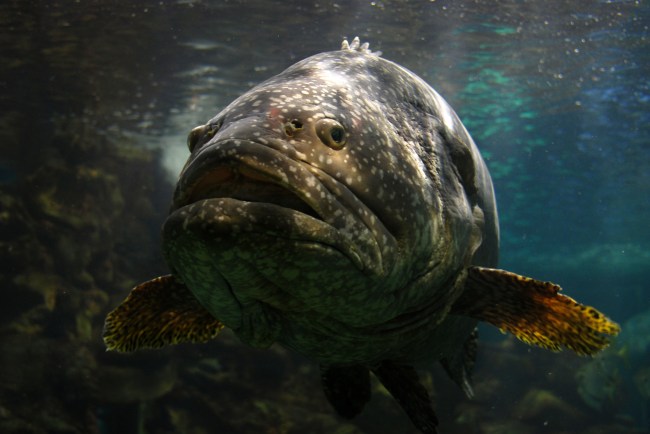 It has been a hot minute since I’ve been grouper fishing. Growing up in southwest Florida, my dad would take me grouper fishing a handful of times every Winter + Spring. The Gulf of Mexico stays particularly shallow in this part of Florida until you head 20+ miles offshore so it was always a fun trip for me getting to go deepsea fishing with him versus the usual inshore fishing we’d do for snook, redfish, and tarpon.

This 350-pound Warsaw Grouper was caught at the end of December and this outrageous catch has gone viral over the past few days. This fish was landed in 600-feet of water in Southwest Florida‘s portion of the Gulf of Mexico which means they must’ve been a hundred or more miles offshore (I’d think).

The FWC Fish and Wildlife Research Institute shared a picture of this gargantuan 350-pounder on their Facebook page with some information about the fish. For starters, the status of the species population in the Gulf of Mexico is unknown so it’s not a fish species they encourage people to go after. That doesn’t mean there isn’t an abundance of these fish out there, they just don’t know. Also, these fish typically inhabit depths around 180-1700ft deep so 600-feet isn’t unheard of for this species.

According to the Facebook Post, the FWRI’s Age & Growth Lab estimated this fish at somewhere around 50-years-old. You could tell me this was a dinosaur and I’d 100% believe you. This fish was caught using rod-and-reel (in 600-feet!!) which means someone’s arms and legs got absolutely torched that day. Just look at this thing.

A big old fish!
This 350-lb Warsaw grouper was caught by hook-and-line on December 29th 2019, off Southwest Florida in ~600 ft of water. Biologists from FWRI’s Age & Growth Lab estimated the age of this fish at 50 years old, making this the oldest sample collected for our ageing program. Acquiring the otolith from this fish was extremely valuable as samples from larger and older fish are rare.
Warsaw are characterized by an elongated second dorsal spine. They’re the only grouper with 10 dorsal spines; all others have 11. Although adults usually occur in depths of 180-1700 ft, juveniles are occasionally seen around jetties and shallow-water reefs in the northern Gulf. FWC does not encourage the targeting of Warsaw grouper since the status of the population in the Gulf is unknown.

These fish get enormous. And every few years it seems like someone in Florida reels in a Warsaw that’s the size of a VW Bug. The current all-tackle IGFA Florida record for Warsaw Grouper is a 436-pounder that was caught in Destin, Florida.

While I was scrolling back through the BroBible archives for previous articles about Warsaw Grouper I came across this insanity from two years ago. A fireman set the Florida state Warsaw Grouper record for spearfishing with a fish weighing over 400-pounds. Absolute fucking insanity right here.