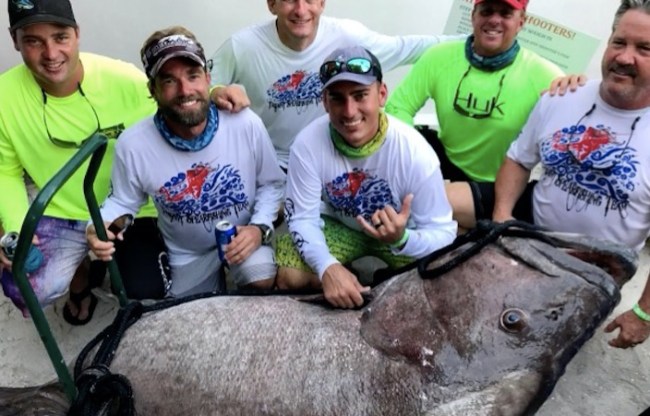 Unfortunately for Bradenton, Florida firefighter James Taylor, he did not win this year’s event. However, his pending spearfishing world record for the largest grouper ever shot with a speargun is about as awesome of a consolation prize as you’re ever going to find. The current/previous spearfishing world record for Warsaw Grouper was 47 pounds (21.3 kg), caught by spearfisherman Chad Palan back on July 25th, 2010.

James Taylor just ABSOLUTELY DESTROYED that record by spearing a 409-pound Warsaw Grouper during the St. Pete Open while diving 85 miles offshore at a depth of 250 feet. The fish was weighed by the Florida Fish and Wildlife Conservation Commission and tipped the scales at 409-pounds. That’s 362 pounds more than the current Warsaw Grouper world record, and 198 pounds more than the largest grouper ever shot with a speargun. That honor is currently held by Dewey Hennessy who shot a 211-pound Gulf Grouper in Mexico decades ago on May 5, 1968.

Just look at this monster:

You can see some footage of the 409-pound world record grouper being weighed here:

For a complete list of the current spearfishing world records, you can click here. There are some very breakable world records out there in the field of spearfishing if you know what you’re looking for. (h/t ABC Action News)